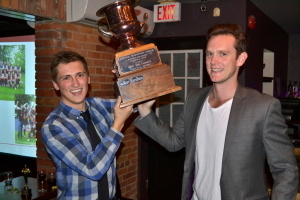 The Toronto Dingos will be celebrating our 2016 season and recognizing the fantastic efforts of individuals both on and off the field this Saturday evening at Le Marche in Brookfield Place.

After a season that many positives can be drawn from, we will be going through our round-by-round Best & Fairest voting to determine the club's MVP, while also recognizing the achievements of players new and old from the season gone by.

The awards that will be handed out are as follows:

Stay tuned to our social media pages (@TorontoDingosFC) to see who the winners are, and check back to torontodingos.com for a full wrap of the night!