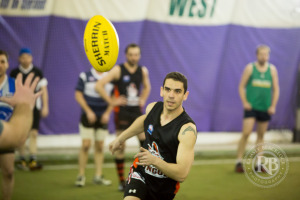 The Dingos headed to Kingston for their third annual pre-season camp from May 7-8th. In what has become a popular event on the club's calendar, more than 25 players headed down the 401 for a day of hard training and team building before experiencing everything Kingston's nightlife had to offer.

The team arrived at the 1000 Islands Sport Complex and got stuck into some fitness and communication drills led by new coach Geoff Hansen. After completing a solid skills session, the team was divided into two groups for a 45 minute scrimmage. All new recruits looked very impressive from the get-go, with Greg Gilbert kicking a couple of early goals and Thomas Santibanez winning a lot of the ball out of the midfield. The scrimmage was played at a high-intensity as second-year Dingo Mike Bocian clashed heads with James Duggan, resulting in the former requiring a trip to the hospital and four stitches.

In true Dingo form, Mike didn't let the injury hold him back, and he was at the hotel and ready for a night out only an hour and a half later.

The Dingos will continue to train on Thursday nights in the lead-up to our opening round clash with Ottawa on May 28th in Toronto.

If you're interested in joining the Dingos for 2016, it's not too late! Send an email to recruiting@torontodingos.com and we'll provide you with all the information you need.