2016 Social Calendar to Kick Off on Saturday 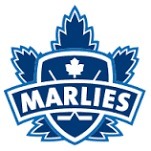 The Dingos' 2016 social calendar will kick off this Saturday as the team heads to the Air Canada Centre to watch the Toronto Marlies take on the Portland Pirates at 1:30pm. Marlies games have become marquee events on the club's calendar, and this will be the fourth successive season that the Dingos have taken in an AHL game.

Saturday's game will be a great chance to get a look at some of the Leafs' up and coming stars, with William Nylander having recently returned from a concussion he sustained in the World Junior Championships, and recently acquired Tobias Lindberg lacing up the skates in what will be his fourth game for the team.

The day will be bookended at nearby pubs, as 25+ Dingos celebrate the beginning of the club's 21st season.