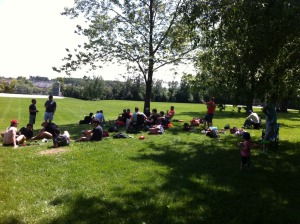 This past weekend the Division 1 Dingos headed out on a road trip to face the Grand River Gargoyles in Guelph.  Traditionally, the Dingos have not fared well in Guelph, losing in 2014 and being eliminated from Finals in Guelph in 2012.  The boys were focused, however, looking to avoid the late-game collapses that marred their recent matches against the ‘Roos and Hawks.  Coach Robbo reiterated that message prior to the game, urging the players to focus on one quarter at a time and play hard-nosed footy.

The first quarter saw plenty of back-and-forth action.  While the Dingos seemed to control long stretches of play, some mental breakdowns allowed the Gargoyles to push back.  The highlight of the quarter may have been rookie Siggy breaking away from a boundary throw-in and launching a high kick through the uprights, which he celebrated with a jumping cowboy lasso-dance of joy.  Siggy seemed to inspire the boys and the Dingos piled on, adding 3 more goals for the quarter to take a 2-goal lead into the break.

While the Dingos pushed their lead to 4 goals by halftime, they also hurt themselves with multiple 50m penalties and avoidable mental errors.  Fortunately, the Gargoyles were unable to take advantage, as the backline of Mike, Karas, and Ramma held first and repelled multiple attacks.  Up front, the big duo of Wado and Fridgy were making things difficult for the Grand River backmen, taking big marks and adjusting the timing of their kicks and leads to create open space.

Coach Robbo once again asked the boys to focus during the halftime huddle.  He asked who was going to step up, who was going to show how much the Dingos wanted to win the game.   And the Dingos responded.  To start the second half, the Dingos won three taps straight out of the middle, pumping the ball long to Wado and Fridgy for goals.  It was a clinical display by on-ballers Thumper, Shauny, Alex, and Ruckman Tom Bell.  Eventually, some other Dingos got to touch the ball; Noddy and Jimmy running off the halfback line through the middle to pump the ball long, Wellsy taking some marks out on the wing, and Denis picking up the crumbs to keep the ball moving forward.  All told, the Dingos put 8 goals on the board in the 3rd quarter, stretching their lead to 10+ goals.

In the 4th, the Dingos kept up the attack.  Gaz got in on the action, taking a dangerous mark in a pack and kicking the ball wide for a single point.  He would get redemption moments later, however, getting fouled in front and slotting the shot through at the siren.  Final score, Dingos triumph 18.10.118 to 7.3.45.

BOG went to Tom Bell for his great work in the ruck, with Fridgy, Jimmy, Wado, and Alex getting honourable mentions.  Next up, the Dingos take on the Toronto Rebels at Humber South.