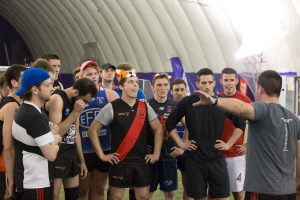 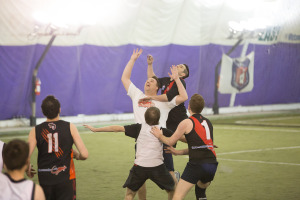 If you happened to have crossed paths with a member of the Red & Black this passed Sunday or Monday, they may have been moving a wee bit gingerly - that was thanks to an intense, 3-hour training session that took place in London, On last Saturday, the second of what will no doubt become an annual Pre-Season Training Camp tradition.

In 2014, thirty Dingos hit Highway 400 en route to Barrie, On for the first annual pre-season camp, and the coaching staff were keen to repeat the event ahead of the 2015 year. While the hard workout and drills were useful in a footy sense, the trip was also designed to build the comradarie in the club for the upcoming season, as well as make the rather large swath of new Dingos feel welcome. So while there were plenty of sprints, burpies and squats on Saturday, there were also a few well-deserved drinks later that night.

There were also a number of fantastic photos taken by Ramsey Blacklock, who has posted all of them up on our Facebook page - big thanks to Chef Ramsey for that... and a tip of the hat to Gary Conlon, who was in the process of doing some filming for the club before an unfortunate camera-gravity incident.

With the trip behind them, the club will continue to gear up for the upcoming 2015 season twice a week, Tuesdays & Thursdays, at David Balfour Park near Yonge & St Clair.