Interview: "Heater" Heath Neville on the NBA, quality Canadians at the club and surfing 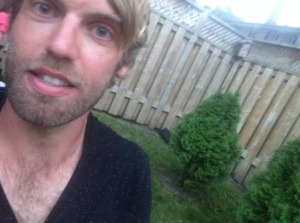 Heath Neville is this week's Toronto Dingo's player interview. As a first-year Aussie, he's been asked to play forward on a few occasions and in the backline when needed. Kicked five goals in his first match against Hamilton Wildcats, is a great contributor on the field and loves a good time. Here's what he had to say.

Q. Where in Australia do you hail from?

I was living in ​Brisbane but grew up in Melbourne.

Q. What AFL Team do you support? Do you follow any North American Team? if so who/why?

The Bombers. I have been going for them since I was a kid.

I'm a big fan of the NBA. Originally a fan of the Bulls but when Rose got injured I thought it would be be fitting to follow the home team: the Raptors.

Q. What is your favourite and least favourite things about Toronto?

Favourite things would be the access to the NBA. The city is a great hub to travel from and has a great atmosphere in summer. The Underground Garage also deserves a mention.

Least favourite is definitely the Winter. Also trying to work out the excluded tax in prices gets annoying after a while.

Q. What are your thoughts on playing footy over here?

I love it. Its good to have a familiar setting when being so far from home and to see see the skills on some of the Canadians is pretty impressive. Some of them would go alright in some of the suburban leagues back home.

Q. What do you love the most about being a part of the Dingos Football Club?

It's a great social club. I have played at a few clubs before but the quality of social events the the club produces is a class above.

Q. What has been your best moment/event with Dingos so far?

Best event so far would have been pub golf. It was a cracking day out with the boys and plenty of memories were made.

Q. Apart from Footy what else do you love to do, what are your hobbies?

I love travelling,watching MMA.  I like to do a bit of brazilian Jiu Jitsu, Surfing and having a few beers with the boys.

Q. How did you fare out at the Dingos Pub Golf this year? What did you think of the winners?

First of all well done to Robbo and George. Good to see them don the green jackets at the end of a controversial night.

I thought we were serious contenders but you would have to ask my golf partner Geoff how we fared. He had the score card all night. I think it was lost or thrown out in disgust after the second score count.

Q. Give us some unknown fact about Heath “the Heater” Neville

It's just Heater. ​Where and when did "the" come into it? Are you making things up Gaz?

Q. Overall what would you like to achieve this year with the club?

Obviously win the flag. Plus have a great time off the field with the boys as well.

Q. Who is your favourite dingo and why?

Whoever passes me the ball on a Saturday. Just so i can say i got a touch for the day.