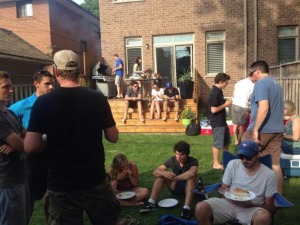 After the two wins against the Hawks at Scarborough, more than 20 players, club members and family supporters made the trip to the west end of Toronto for burgers, sausages and salads.

The annual BBQ has become a staple in the Dingo’s social calendar. Each year one of the players puts their hand up to host the event. Each year it is somewhere different: The Steinbergs'. The O’Briens'. The Stewarts'. Everyone takes a turn.

Vice president Jimmy Duggan enjoyed the burgers by saying "they were juicy and fresh."

Alex Aitken was impressed with the level of comfort at the host destination, "How good are these chairs?"

Dingo Veteran Bob Clarke soaked up the atmosphere  and when asked if he had fun he said "I'd come back for sure."

Here’s some of the photos from Saturday’s BBQ.