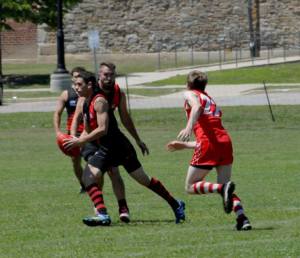 The Swans have made great strides this season and currently sit third on the ladder with a 4-2 record. It was another game of ups and downs for the Toronto Dingos who were undermanned yet again but managed to get within 14-pts deep in the third quarter, only for the Swans to kick away in the final term.

With a handful of Div.1 players coming off four quarters with the Div.2 team, the Dingos were still able to match it with the Swans in the contested ball for the first two quarters but couldn’t put a score on the board. The Swans half-back line pushed hard and wide off Dingo turnovers and forward entries. Despite the turnovers, the Dingo’s mid-fielders were dominating, as Alex Aitken, Tom Humphries, Geoff Hanson and ruckman Tom Bell won plenty of the ball and worked tirelessly most of the day.

Unfortunately the goals just didn’t come, and credit that to the Swans defence who swarmed over big Heath Neville whenever he’d go up for the mark, and then race away with the crumbs in an effective, run-on strategy. For the Dingo backline, it seemed almost impossible to cover everyone, as the Swans would flood forward and force the Red and Black defenders to choose between staying on their man, or leaving him to corral the oncoming Swan. Needless to say, the Swans took full advantage of the run, despite the great efforts of the Dingo mid-fielders, and ran up a big lead at half.

Once again though, the Dingos answered in the premiership quarter, leaving everything they had on the field and firing back with a 5 goals to get within 12 points. While the goals were shared around a bit, it was without a doubt the premier play of the mid-fielders that sparked the fire, from Alex racing free in the forward 50 to Thumper’s savvy positioning that went unnoticed by the Swan defenders, the Dingos could feel the win before them, a massive comeback that would have lifted the club in what has otherwise been a difficult season

Unfortunately for the Red and Black, these were not the Ottawa Swans of old, who would fold up in the face of a veteran squad humming on all cylinders. The Swans came out quick in the 4th and shut down any such comeback, potting three goals in the first 10 minutes and crushing any resistance. The legs simply went out of the Dingos, who spent it all in the 3rd just trying to get close, and a deep bench and healthy dash of determination from the Swans saw them hold off the home squad and secure the victory.