Dingos Throttled by Hawks in Rain 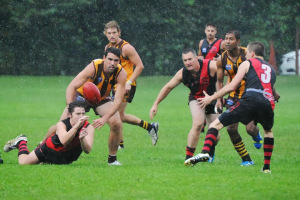 With the 2013 regular season over, this past Saturday saw the Div 1 Dingos begin Finals footy.  Thanks to their 2nd place finish on the ladder, the Dingos were not facing elimination, but a solid hitout against a tough Hawks side would give the boys some confidence and momentum heading into the semi-finals the following week.

From the get-go, however, it was not going to be easy.  The Hawks are a deep, talented side, and have been on top of the ladder for the entire season.  In addition, a number of Div 1 stalwarts were kept out of the lineup to nurse injuries, forcing Div 2 players such as Roman, Mick D, Jaker, and Gordo to step up and play the game with no bench.
The thin Dingos lineup came out of the gates hard, however, winning the wet footy out of the middle and keeping the pressure in the Hawks' defensive zone for the first five minutes of the quarter.  But a quick counterstrike and goal by the Hawks seemed to open the floodgates and the Dingos were on their heels for the rest of the quarter.  Hard-running by the Hawks' midfielders opened up opportunities to kick long into the Dingos' backline, where Ramsey Blacklock, Dave Wells, and Roman were hard-pressed to contain the Hawks' forwards.  While the soaking conditions kept either club from taking any clean marks, the Hawks' crumbers were able to gather the loose footy and kick it long into goals.  The end of the first quarter saw the Dingos down by six goals.
Not much improved throughout the rest of the game.  As always, Jimmy Duggan was a tireless worker in the middle, trying to push the footy forward.  And ruckmen Spider Wells and Steve Gordon did an admirable job, competing for every tap.  Under constant pressure in the backline, Yoni Moussadji stood out, as did Wellsy who was following Shuttsy around on the day.  Overall, however, while the effort was there, the result left much to be desired as the Dingos fell 15.10.100 to 1.4.10.
In his post-game, coach Robertson emphasized the positive effort and passion from the match and will now get his boys to focus on their do-or-die semi-final this week against the Toronto Rebels.

Rob Colburn's photos for this match can be found here