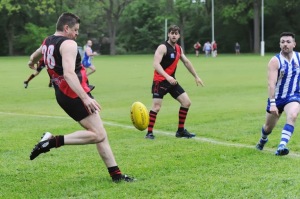 This past Saturday against the High Park Demons, the Toronto Downtown Dingos Football Club was proud to honour one of its stalwarts, as Bobby Clarke played in his 150th game for the club.

This milestone places Bobby among some elite company within the Dingos; he is only the fourth Dingos player all-time to reach that level, and only the second Canadian. These games have included 3 Grand Final triumphs and over 20 Finals matches. This is truly a testament to the hard work and dedication that Bobby has displayed for the club over the years.

With so many games under his belt, Bobby has seen action in most positions on the field, from Ruckman to Full-Forward (over 30 goals in his career). Most recently, however, Bobby has settled into the backline, serving as a vocal leader who uses his footy smarts and accurate kicks to keep things calm and steady on defense. Never one to shy away from confrontation, Bobby is a fiery presence both on and off the field, and has been a strong social member of the club for many years.