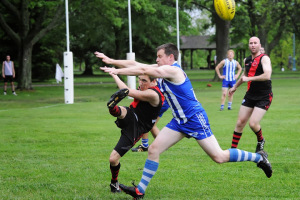 Round two saw the Dingos play their first match of 2013 at Humber South, and their only Friday night match of the season against an always-powerful Etobicoke Kangaroos squad. The Roos had won the previous two encounters against the red and black by an average of 101 points, but the Dingos knew that they were capable of matching it with the Roos this time around due to some strong off-season recruiting. The skies opened up prior to the opening bounce, ensuring that the ball was wet and the ground was muddy for all four quarters.

After emphasizing the importance of starting matches strongly, the Dingos came out of the blocks quickly in the first quarter. Continuing his form from the final quarter against Guelph in round one, Wade Edwards kicked the first two goals of the match. The Dingos continued to belt the ball long into the forward line, and when Aaron Jefferies converted after being on the receiving end of a high tackle, the margin was out to twenty points. The Roos responded quickly, piling on the next four goals to end the quarter with a narrow five point lead.

The arm wrestle continued in the second quarter as both teams tackled hard and the slippery ball made clean possessions few and far between. Camilo Serpa opened the scoring, using his soccer skills to kick a fantastic goal under pressure in the forward pocket and put the red and black back in front. This was followed by another goal to the Roos, as they regained their narrow lead. Despite trailing, the Dingos’ backline made it difficult for the Roos to take a mark inside fifty, and the likes of Ramsey Blacklock, Tom Bell and Bob Clarke worked hard all match to rebound the ball back into the midfield. Jimmy Duggan slotted his first of the season after a questionable fifty-meter penalty, and true to form, the Roos had a quick response. The margin at half time saw Etobicoke lead by the narrowest of margins, and it was clear to both sides that neither was going to let up.

Unlike the opening half, the third quarter began very slowly with both sides struggling to hit the scoreboard. Wade managed to slot through his third of the match before appearing to injure his knee and spending the remainder of the quarter on the sidelines. The midfield group of Mal Brady, Max Parish and D’Arcy Hill ran hard and created space, however the ferocious tackling in the midfield and strong defense by both sides made goals difficult to come by. At three quarter time, the scores were level at 48 apiece, but the red and black were confident of being able to get over the line.

Coach Justin Robertson moved veteran Craig Stewart into the midfield in an attempt to bolster the red and black’s clearance rate, and this was to great effect. Stewy was everywhere in the last quarter, marking strongly and kicking a crucial goal from just inside fifty after a strong tackle. As had been the story all day long, though, the Roos responded quickly to regain a narrow lead. As the clock wound down the Dingos increased their pressure, desperate to leave with a win. In his first game of the season, Danny McIlravey took a strong contested mark just outside fifty and hit Wade on the chest with his kick. Wade lined up for goal and a chance to snatch victory for the red and black. Unfortunately, the tight angle made for a difficult shot and the resulting behind tied the scores. A frantic final minute played out as the Dingos continued their forward pressure, and the siren sounded with neither side sure what to make of the result.

Stewy was best on ground for the Dingos, while Ramsey, Mal and D’Arcy were all named in the best players.

Rob Colburn's photos for this match can be found here.