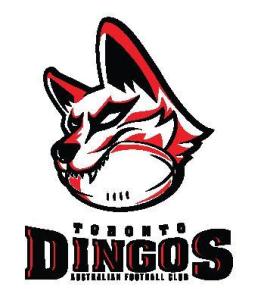 This past week saw a storm of controversy break out across social media and the Dingos email list as President Craig Stewart put forth a proposal that the Dingos upgrade and modernize their classic dingos paw logo.

"I have been looking to replace the Dingos paw for several years now," Craig stated, to howls of outrage from Dingo traditionalists. One anonymous Dingo member wondered what else President Stewart was looking to change. "If the Dingos paw logo is out, what is next?? Are we going to trade in the red and black, put on blue and white stripes and call ourselves the 'Cats? I'd rather quit." Other members were less hysterical, but no less opposed. One member, who would only identify himself as "Y. Moussadji" commented, "This seems like change for the sake of change. Typical Stewy."

Coming to the aid of his embattled President, Dingos' Vice-President David Wells put forth the strong argument that "the Blue Jays seem to change their logo every year and it's brought them nothing but success." Despite this obvious truth, the debate continued to rage. With coach Mick McFarlane presenting a mockup of the proposed new logo, battle lines were quickly drawn in the sand. Described as "fierce" and "modern" by its supporters, the new logo certainly is a change from the classic Dingos paw logo which has become iconic across the OAFL and the city of Toronto. "The old one sucks!" cried Chris Buczkowski, never one to hide his opinion. "You sucks!" retorted an angry Traditionalist, to general confusion.

With his Presidency perhaps teetering on the edge of collapse, Craig Stewart quickly moved to quell the issue, pushing back the implementation of the new logo until the off-season, when the entire membership of the Toronto Dingos football club can vote on it at the Annual General Meeting. Sounding frazzled and surprised by the determined opposition to his proposed change, President Stewart could only say about the logo-switch, " I don't think this means that the history or tradition of the club is lost." Either way, it will certainly make this year's AGM a cracking one. And, if the club covers the cost of beers as per tradition, expensive!

Stay tuned to this space for more details as they emerge!