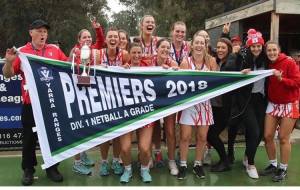 After reclaiming it's title as the YVMDFNL's leading netball club in 2017 OFC suffered a serious setback when dual premiership winning coach Tamara Luke decided not to go on.

Tam was playing football as well as netball in 2017 and in 2018 made a full time commitment to the Box Hill Hawks.

Unsurprisingly she quickly established herself as a team leader and at the end of the year was drafted by St Kilda.

Meantime OFC made a successful recruiting pitch to Tim Smith as a replacement. Tim had vast experience at VNL level.

It was a decision which quickly paid dividends as Tim devoted significant time and energy to the netball program.

As the season unfolded it became clear that OFC had scored another recruiting coup with defender Brodie Smith.

Brodie went on to win the Best Player award during the Grand Final triumph over Belgrave.

Of particular interest during this series was the defeat in the semi final at the hands of Belgrave. It was A Grade's first loss in a finals series since 2016. In cold and windy conditions at Yarra Junction the opposition threw 20 goals in a third quarter blitz.

However Tim Smith's side went on to reverse that result in the grand final.

Having established itself as the premier team in the YVMDFNL OFC was to face a fresh challenge in 2019 when powerful suburban clubs , including Berwick, Beaconsfield and Narre Warren joined the competition.

Would it be the end of an era for OFC ?

( Please cick on PDFs below for reports/photos)