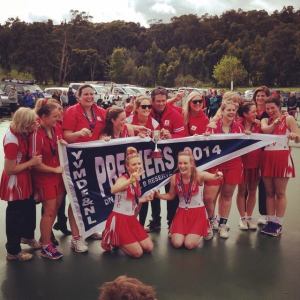 This was OFC's first ever Netball premiership and what a sensational day it was for the club as the Red and White girls just managed to hold out Wandin in an absolute nail biter.

A match report is contained in the PDF below.

OFC finished fourth on the ladder then stormed through the finals series to grab the flag.

Of particular interest was the size of the OFC crowd which supported the girls during this game.

It's estimated at least  200 people cheered on the Red and White and certainly the netball crowd was much noisier that day than the football crowd at the adjoining Healesville Oval.

This victory was a harbinger of a golden era for netball at OFC which emerged as, arguably, the strongest netball club in the competition.

If we use a 3,2,1 system this is the resultant voting-

Note: officially this was a "B Reserve" premiership. B Reserve replaced D Grade for a short period of time. The grading configuration was A Grade, A Reserve, B Grade and B Reserve.