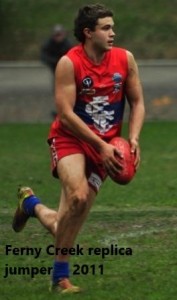 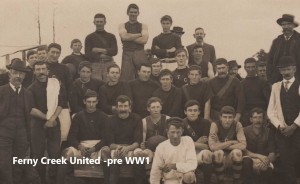 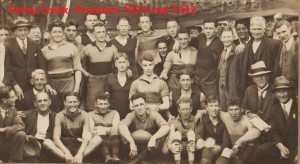 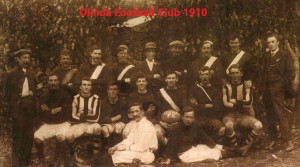 OFCFNC wishes to thank Armin Richter from Monbulk Historical Society who provided many of the early years details.

The PDFs also include our series on our "Greatest Players" .

1902- One Tree Hill Football Club formed. There may have been a competition also involving Monbulk and FTG. Matches were played in the paddocks of W Breen (President). Breens paddocks are near the intersection of  the Mt Dandenong Tourist Rd and Sherbrooke Rd.

1903- FTG joins The Reporter Association ( focused on Box Hill). OTHFC complains it's impossible to travel by train to play Canterbury. OTHFC and Monbulk didn't follow FTG to The Reporter league but did clash in a Challenge game.

1905- residents of Sassafrass and One Tree Hill discuss forming another  football club with Tom O'Don as secretary and treasurer. Sassafrass plays a Challenge game against Monbulk.

Ferny Creek( United) Football Club ( red and blue colours. "United" seems to have been dropped from the name after WW1)

A report in 1910 said FC United consists of the "young bloods of Ferny Creek, Sassafrass and Sherbooke."

The captain W Sharpe was from Sherbooke, Hon Sec Gordon Bird was from Ferny Creek and the President C Earney was from Sassafrass.

1910 - Olinda, Ferny Creek and Monbulk  play each other four times- according to Life Member Charlie Hackett.

1912 - Ferny Creek lose the final game, and the premiership, to Monbulk by four points. Charlie Hackett wins the MDFA goal kicking with 24 majors.

1914-15- there is evidence FC United played some games in these years.

1919- Ferny Creek and Monbulk again battle for the flag and this time  the red and blues are succesful after Monbulk loses points from six games for playing an ineligible ruckman.

Monbulk challenge the league ruling, and it ends up in the County Court. Newspaper reports say they are "non suited" (unsuccesful). We have found no reports of further court cases but a number of later reports agree that Monbulk won the flag.

1920- Ferny Creek refuse to play in the Mountain District Football Association, which is composed of only Monbulk, Emerald and Gembrook.

1924 - Ferny Creek were premiers beating Belgrave in the Grand Final . FCFC played in five grand finals in a row for this one victory.

1925 - Ferny Creek play in the Scoresby District Football League ( there is no record of MDFA playing that year) and lose Grand Final to Fern Tree Gully.

1932 - Ferny Creek defeat Boronia in the MDFA Grand Final. However Boronia protests that the final bell went too early and the MDFA orders the match be replayed. FCFC refuses, claiming many of it's players were unavailable because of work. The flag is awarded to Boronia. FCFC always counted 1932 as a premiership year,

1933- Ferny Creek disbands after this season with many of it's greats, such as Charlie Hackett and Henry Linden, beginning to age. Jolly Rowe is awarded the MDFA medal for best player.

1910- Olinda defeated Ferny Creek in the Grand Final (deciding match). It's believed there was only one other team in the competion (Monbulk). Although there is no clear evidence OFC was named premier we have scores from the year showing OFC beating FC United 8.19 to 2.7 and FC United beating MFC 14.29 to 1.5.

1934 - Olinda Football Club Reformed with a number of the Ferny Creek boys joining the red and whites. It's believed they played with blue socks to recognise the FCFC input.

1939 - Olinda merges with Monbulk for one season and plays in the Ringwood District Football Association. Olinda-Monbulk made semi finals but lost consecutive games to Boronia and Ringwood.

The captain was John Mitchell from Monbulk while the President was G Cronin from Olinda.

On July 1 the match against East Ringwood is abandned at 3/4 time with snow on the ground. OFC is leading 6-12 to 2-1 at the last break.

2019- A Grade netball makes it three flags in a row

2020- season abandoned because of Covid virus

2021- OFC fields a team in womens competition (see PDF below)