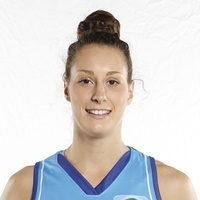 Bio: The talented South Australian has wasted no time establishing herself as one of the brightest prospects in the WNBL, winning the 2013 Betty Watson WNBL Rookie of the Year award after an outstanding first full season in Adelaide.

It got better for the 19-year-old, helping the Jayco Australian Gems to a bronze medal at the 2013 FIBA Under 19 World Championships, earning All-Star Five honours.

A scholarship holder at the Basketball Australia National Centre of Excellence, Talbot earned a call-up into the Jayco Opals training camp ahead of the 2013 FIBA Oceania Championships.

Injury saw Talbot play only 15 games in 2013/14, despite the setback the young gun was picked up in the 2014 WNBA Draft by the Phoenix Mercury with selection 33.