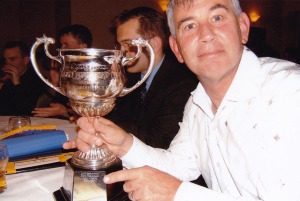 The Epsom Football Club and Strathdale Soccer Club will go head-to-head in the annual memorial BASL Fixtured match for the Kevin Merchant Cup, on the 20th of July at Epsom Huntly Recreation Reserve on Pitch 5.

This fixture was created in honour of Kevin with his involvement and successes with both clubs but to also raise awareness for cancer. The Epsom Football Club will have a Donation Tin at our canteen if anyone would like to make a donation throughout the day, all donations will be greatly appreciated with the donated funds going to a Cancer Foundation of the Merchants Family choosing.

A bit about Kevin Merchant -
Kev was not only a Life Member of the Epsom Football Club but was a passionate football fanatic, but he also was a fantastic leader, club person, inspiration and wonderful father and friend.
Kev was always the first one in to lend a hand, always the last one to leave. He, and a team of many strong selfless minded people... built the foundation of the Epsom Football Club.