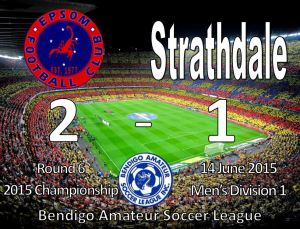 Today we had four senior teams playing at home vs BASL powerhouses Strathdale. The large crowd had our canteen volunteers working flat out, and everyone who was present enjoyed the spectacle of some high quality local football.

In Round 6 of the BASL Championship, 5th placed Epsom hosted ladder leaders and reigning champions Strathdale in the match of the round.
Due to several long term and short term injuries, Epsom's starting lineup was inexperienced, with Jye Cohen making his Div 1 debut on short notice after playing Div 2 in the morning.
The match started in a bright fashion for Strathdale, making a number of promising moves down its right wing. However, Cohen was unbeatable at Left Back ensuring Strathdale remained goalless early on. Putting his body on the line, Cohen too was injured after making a miraculous clearance from yet another Strathdale attack.
Epsom was starting to work its way into the game with its forwards showing great pace to beat Strathdale's offside trap. Trent Gladstone scored a great breakaway goal, with Epsom entering the break up 1-0.
In the second half, Epsom started with speed and passion. In the 59th minute, Trent Gladstone narrowly trickled the ball across the score line to double the lead. Strathdale then attacked with vigour. A series of spectacular diving saves by Epsom Goalkeeper Alister Nicolson kept Epsom in the game, only conceding a single late goal.
As the referee blew time, the final score was 2-1 in what was a well deserved win by Epsom.
Next week, Epsom travel to Moama while Strathdale have the bye to ponder what might have been.

In the Women's division, a solid game also with Epsom hosting Strathdale resulted in a 10-0 win for the home team. The game commenced with a strong effort by both teams; Strathdale holding Epsom to just one goal while not scoring any itself.

After the break, Epsom came back and pushed the opposition hard, consequently leading to a 10-0 win with every player performing strongly. Special mention to Caitlin Green, for scoring an amazing four goal, with five different Epsom players on the scoresheet.

In Div 2 action, ladder leaders Strathdale visited Epsom in what looked on paper an easy win for Strathdale. However, on the field a different story emerged. A Leigh McDonald looping ball found his brother, Curtis, who then ran on and beat the keeper in a 1 on 1.
But shortly after, an unfortunate handball in the box was given as a penalty and Strathdale equalised from the spot, and at half time scores were even at 1-1.
The second half started evenly with opportunities at both ends. Epsom's Goalkeeper, Isaac Harvey, made a number of super saves but couldn't keep hold prevent Strathdale from scoring three times after the break. An Epsom penalty was awarded for a Strathdale handball, and was smartly converted by Leigh McDonald, who then promptly doubled up with a scintillating long-range strike from well outside the box.
In the final minutes, Epsom had a free kick in a promising position but couldn't convert. When the dust had settled, Strathdale were pushed harder than they've been pushed all season but were still narrow 4-3 winners.

In the Youth Division, Epsom faced the extremely challenging task of hosting Strathdale who had scored 7 or more goals in each match this season. The match started evenly, but after about thirty minutes a Strathdale run straight down the middle found the back of the net and broke the deadlock. A second goal was then scored by Strathdale before half time.
After the break, Epsom's Jake Alcock found himself in the right place at the right time. An offensive cross from Epsom's Matt Green was collected by the Strathdale goalkeeper, only for Alcock to smartly intercept the goalkeeper's pass and to send the ball to the back of the net.
But at the end of the game, Strathdale found themselves pressed but had still run out 5-1 winners in the most competitive game they've had all season.

U12 B vs Castlemaine: lost.