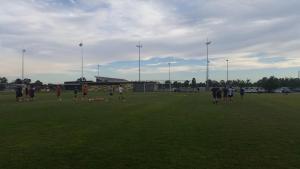 After last week's 1-1 Draw vs Moama, Epsom FC will be keen to get the three points in the "League Cup" clash against Strathdale - last year's BASL Champions.

The match will be another away game for us, played away at Strathdale at 3pm on Sunday.

The clash between the two largest clubs in Bendigo promises to be a good one. The Scorpions are coming off a tense but well played 1-1 draw away in Moama, and Strathdale also had a 1-1 draw last week away at Eaglehawk. Both teams will be desperate for 3 points this week.

The last time these teams faced off was a cold July evening under lights at Epsom, where a flowing encounter produced a close 3-2 loss for Epsom. Here's hoping Epsom can turn the tables this time and register its first win for the 2015 BASL season. It will be a great opportunity to test pre-season form in the League Cup, before the Championship season commences in mid-May.