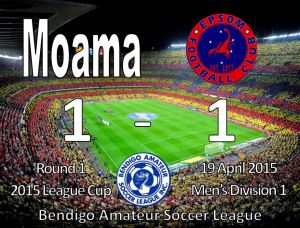 Senior Men
This week, Epsom kicked off its season with a trip across the Murray to Moama. It was a hard fought match, and despite a solid pre-season there were still a few rusty moments - signs that everyone is not yet 100% match fit. With a number of injuries and other unavailabilities, this gave a number of younger fringe players their opportunity at the higher level. Adrian Holland scored a great first half goal from  and we entered the break with a slender lead. Although Epsom looked like taking the three points, a second half equaliser by Moama meant that each team ended with just the one point.

The Div 2 team also played away in Moama and won 2-0, with David Jones and Corey Page scoring the goals.

Senior Women
The Women's team too played in Moama. Their superior class was evident in all facets of the game and they were easy winners 13-0.