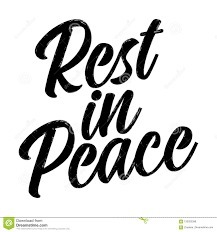 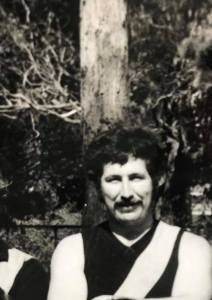 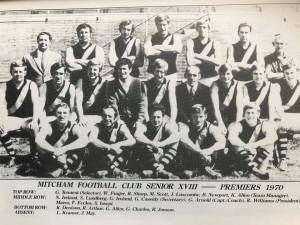 The Mitcham Football Club and Past Players & Officials Association, sadly communicates the passing of former player and Club President, Warren Finger. Our thoughts and sympathy go out to his wife Pat and his children Rebecca and Nina along with the extended family and of course Warren’s close friends.

In his final days Warren did not elect to go into palliative care, preferring to go home, however passed away shortly after on Friday 8th November. He was only in his early 70`s and worked as Carpenter / Builder for most of his life.

Warren was a local Mitcham boy who started his footy at MFC with U16s in the 1960`sCommencing a 15 year playing career at Mitcham, highlighted with a Senior XV111 - Best & Fairest in 1968 under Capt /Coach Barry Capunano.Warren holds a unique double at Tigerland as a Premiership Senior player in 1970 and a Premiership President in 1975.

1975 was a big year for Warren, attaining the Div 1 Premiership and being awarded with a Life Membership for his long and distinguished service to the Mitcham Football Club. On leaving Mitcham he was Premiership Capt. / Coach of Grong Grong Matong near Wagga Wagga in NSW and then relocated to Sydney playing and coaching in a long career in the Sydney suburban football competition. Football was very much in his blood and he remarkably continued to play into his 60`s in various Vet teams.

A very determined man who devoted so much for the good of the MFC. As did his wife Pat who like Warren was not shy of hard work and did whatever it took. Mitcham wishes to acknowledge both Warren and Pat for their friendship and unwavering services to the Club.

A good person and an even greater mate