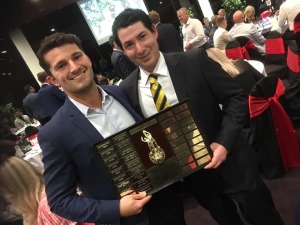 Its been a BIG week for the Mitcham Football Club after last weekend's grand final win over one of our traditional rivals, Ringwood. In fact, the Mitcham / Ringwood rivalry is one of the longest standing in the EFL, having played each other over 80 times. That said both clubs have a mutual respect which was forged even stronger in 1989 when Greg Pimm, our dual premiership fullback, suffered a heart attack and passed away playing against Ringwood at Jubilee Park. The Ringwood football club have always honoured Greg’s memory and every time The Tigers and Redbacks play during the home and away season for the Greg Pimm Memorial Shield. With the Redbacks currently holding the shield after our round 16 clash this season and leading into last Saturdays grand final, one way or another the two clubs wouldn’t be playing each other in 2020. Last week, Ringwood president Jake Keogh reached out to our club with the offer that regardless of the result on Sunday, the Ringwood Football Club had decided that “With our new redevelopment of Walker Park and the fact the shield bore the Pimm name, it belonged in the Tigers new digs for 2020 and until both clubs play each other again in home and away football “. So, when the two club presidents caught up at the league presentation night and the shield changed hands, it fittingly showed that this was more than a game, but importantly two clubs with mutual respect!