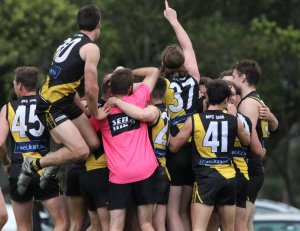 For the second week in a row the Mitcham Tigers have stormed to a finals victory with both the Seniors and Reserves into  grand finalS NEXT SUNDAY at East Burwood, Unfortunately the under 19's fell short in their preliminary final. The under 19's enjoyed an excellent season under the watchful eye of coach Mark Brindley who has done an excellent job with his young chargers. With under 19 Football all about development our unders have delivered in spades with a number of boys playing senior football this year.

NEXT Sunday we have both the Seniors and Reserves playing out at East Burwood in Grand finals and the boys would again love to see the Tiger Army out and about supporting - Of course Dress code is strictly Yellow and Black. Check out the official Mitcham website @ www.mitchamfc.com later in the week for the full match reports and our official Facebook page for details of The Grand Final after party. Once again BIG THANK YOU to ALL those who turned up to support the club and to Debbie Stingell for the Magnificent Photos of ALL there games #strongandbold #tigertime

To the credit of the Heathmont Jets they went into the Preliminary Final with a nothing to lose attitude which in the end put pay to our aspirations of playing in a Grand Final. The weekend’s disappointment aside, I would like to praise and thank a resilient group of young men who represented their club throughout the season with distinction. It has been a pleasure to work with you all throughout the season.

I would like to wish Neil, Aaron, Steve, Brett, Carl and Ben along with their respective squads, all the very best for this coming weekend and thank them for the enormous support they have provided the Under 19's coaching staff and players throughout the season.

Our boys were up and about with some nerves on Saturday as for most it was their 1st preliminary final, the stakes are high of course. Heathmont had made 8 changes to their side from last week with 6 senior’s players being available however our confidence was high to get it done. We started not as we would like with Heathmont jumping out of the blocks kicking 5 goals to 0, they were super around the contest and their pressure was good, being behind we had to get back to some basic’s our mids intensity lifted and we controlled the ball more with short kicks as we had the better of play in the 2nd with a 2 goal term. Halftime we were 5 goals down but could sense they were looking tiered so the message was to run and switch using our speed and ball movement, couple of changes up forward with DJ and Danger, our on ballers were on top as we dominated the 3rd to kick 2 goals to 0 and close the margin to 19 points at 3 qtr time. The lads were confident we could keep going and run over them and we did as the last qtr saw us have 90% of the play, our back 6 setup well and rebounded everything as well as locking the ball in our fwd half, we booted 4 goals to 0 with our last coming with 1 minute to go as Mitch Pavey kicked true to get the win by 6 points. Danger booted 3 and was a class above in the fwd line just teriffic, Mitch Pavey was outstanding all day with tackles, pressure being a real highlight, Tom V in the ruck was super giving us a real advantage especially in the 2nd half and DJ showed his experience as he gave us a real target across CHF. Very happy and proud of the group as they showed so much character to never give up and find a way, they deserve to be in the Big Dance this week and I can’t wait. A Massive thank you to our supporters who were so loud cheering the boys on, it truly means a lot to see them all in the Black & Yellow!

This week we played Boronia in the preliminary final out at East Burwood, with a spot in the grand final on the line it was always going to be a hard fought contest.We started well kicking the first 2 goals of the game against the breeze with our pressure around the footy very strong. We went to the quarter time break with an 11 point lead. In the 2nd quarter we continued to apply a high level of tackling pressure making it difficult for Boronia to move the ball freely, we were able to extend our lead to 18 points at half time. Predictably Boronia came out full of fire in the 3rd quarter with their intensity going to another level. Pleasingly we were able to withstand this and we held a 18 point buffer going into the last quarter. The rain came at the start of the last quarter turning the game into an even tougher slog, we continued to crack in hard not allowing Boronia to win any clear footy and ran out victors by 18 points. It was an outstanding team effort as everyone contributed throughout the day in helping us get the win.

Thanks to everyone who came out to support us, we look forward to seeing the tiger army in full voice on Sunday for the grand final.