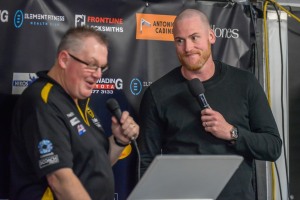 Another outstanding Sponsors’ lunch this weekend for the Mitcham Senior and Junior Football Club with special guest, retiring great and the people’s champion, Hawthorn’s Jarryd Roughead. In a great one on one interview with Gavin Ward, Jarryd gave an insightful brief into his AFL journey, and you could have heard a pin drop when he spoke about his injuries and personal health battles. Earlier in the today EFL CEO Troy Swanston spoke about all things EFL. Major Sponsor Matthew Scafidi also spoke about how sponsoring The Mitcham Football Club had benefited his business and how he believed the Club’s sponsorship program and the Club’s social media foot print was the best in the Eastern Suburbs. He also went on to recommit to the Club next season and beyond, and spoke about exciting changes to his business. BIG THANK you to Nikos Tavern for another great lunch and Graham Bradkte’s for the photos of the event