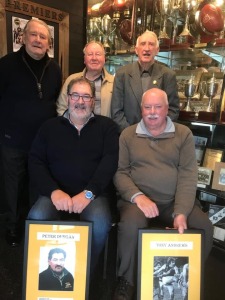 It is with much sadness the Mitcham Football Club conveys the passing of Leo Wishart last Friday 26th July.

Our deepest sympathies are extended to Leo`s wife Maureen, his 3 daughter`s - Debbie, Joanne and Tania and his 5 grand children. Leo was 85.

Leo’s funeral will be a private service for the family.

His extraordinary 33 years active service with outstanding distinction has been acknowledged with a Life Membership and later elevated into the MFC Hall of Fame.

Leo was more than a handy senior player, he was one of the great proponents of the now extinct drop kick. Even in his 40 & 50`s he loved to occasionally come down to help the boys out at training and let rip with few long raking drop kicks, a skill he was extremely proud of.

But it was the man that he was, that endeared him to all at Mitcham. A very popular man who always looked for the positives

As a senior coach he was a passionate orator, motivating not only his players but all who heard him. Loud and clear, no in close secret whispers back then.

Standing above all else was his humility and respect for others.

In 1977 and only a few games into the season Mitchams new Captain / Coach, (Carlton player) Ian Robertson had to relinquish his position due to a senior job promotion with Singapore Airlines.

President , Lee Gale , had little hesitation in immediately asking Leo to take on the role of Coach. Leo did not wish to see his club left in the lurch and readily took the position and duly lifted the Mitcham into the 1978 Grand Final in his second year.

After taking over as senior coach Leo also set the foundations for his nephew Ron Thomas to take over the role as Captain / Coach who added his influence and presence to claim the next three consecutive Premierships for the mighty Tigers.

Leo touched so many people in such a positive way and we are by far the richer for that experience.

This Saturday all three senior sides will wear black arm bands as a tribute to Leo. The senior sides from both Mitcham & Scoresby will also join in a minutes silence at 2pm.