ANOTHER WIN ANOTHER LOSS 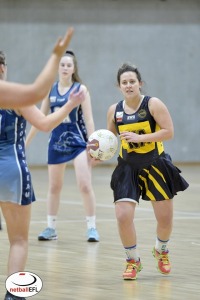 HE Parker was the venue for another memorable Mitcham BLACK win. For some reason the stadium just appears unfinished with exposed plywood stands all around. Maybe construction spent all the budget on having Moccona on site instead of Blend 43? Or maybe it's some sort of post-modern-Scandinavian type design, the brain child of a struggling young architect struggling with substance abuse issues? Like finding an easy way to open a Chupa Chup, it's just one mystery we will never know the answer to.

The game started in the manner you would expect from two teams with plenty to play for; Mitcham for a second consecutive finals berth and Ringwood to hang on to the double chance. Space was harder to come by than a fresh potato cake at a train station food stop, but it was us who took the early ascendancy and a 5-3 lead at 1/4 time.

Ringwood were told to slow it down, which resulted in a much improved second term where they took control of the court. Our defenders were working overtime to hold them back and limit them to a 3 goal quarter, us maintaining our lead 8-7 at the half. The defenders weren't really working overtime as it was still during play, but just worked really hard during work hours, something I actively avoid as a personal preference.

Unfortunately the hard work didn't let up, as both teams continued to try hard, which believe it or not made things hard for the opposition, of which both teams were an opposition to someone. Like a 22 year old male in a sober state, the game was refusing to open up.

We took a 12-10 lead into the last, which quickly extended to 16-11 as we got our brand of netball going. Much in the theme of the night though, Ringwood refused to go away, scoring the next 5 to level the scores with minutes to play. They were like that average co-worker that you really want to get fired, but every time the boss looks like taking action they land a slightly-larger-than average client to hold their spot for another few weeks. Fucking Steve.

Luckily we held our nerve to score the last two, then hold on in an intense last minute to take the win 18-16. Very hard to single out any players as everyone contributed across the court, and it was a determined team effort that dragged us over the line. In the manner of the Montgomery Biscuits in the Triple-A baseball, we have now won 5 of our last 6 with improvement to come. Join us next week as we take on 4th in another must-win game.

Montrose was too strong for Mitcham Yellow in a 13-goal win. Montrose has taken Mitcham’s fifth place on the ladder after the win and is gearing up for continued good form and a finals berth. Caldow scored 22 of Montrose’s 34 whilst Fairbairn had 13 for Mitcham, final score was 34 – 21.