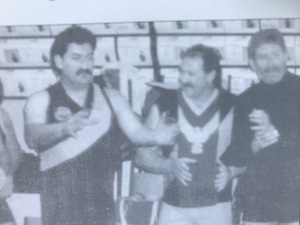 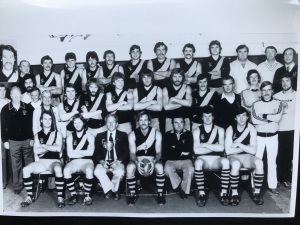 The Mitcham Football Club is saddened to learn of the passing of Ray Bond last week.  Known to all simply as “Bondy”,  Ray passed away  last Friday, June 14, at 64 years of age.

A Large than life character who lived life to the fullest, Bondy helped many friends in their time of need.  Known for his love of Bundy Rum and fishing, he enjoyed his life by the sea at Port Albert (Gippsland).

He was well known and a good friend to many at Mitcham FC, which is somewhat amazing given that he played the majority of his football at Vermont FC apart from two years in 1980 & 1981  when he played for the mighty Mitcham Tigers -  In so doing he carved himself into Mitcham`s  long and colourful 132 year history as the only player to play for two years for two consecutive Senior Premierships.  Ironically, the 1980 Premiership was a 6 goal victory against his old club Vermont.

We sent our deepest sympathy and best wishes to the Bond family and friends.

Bondy had his jumpers re-sown half of each, and played half a game for each club.

A Number of Bondys former team mates and Life Members of the Mitcham Football Club will be attending his funeral.