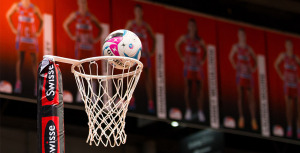 This season we are fielding Two Netball teams in the EFL Netball Competition and Friday night the girls played together for the first time, check out the two match reports from our mystery reporters ....

MITCHAM BLACK - For the third week in a row we headed to Chirnside Park, which apparently has its own microclimate, and is always at least 6 degrees colder than anywhere else in the Southern Hemisphere. And I’m pretty sure they still have a Sanity, so if you want to be cold and spend $30 on a CD, I would highly recommend it. The night only got worse with their canteen being closed, but the assortment of sweets still on display just teasing eager mouths. Anyway there was also a game of netball on. Early days we did the damage through Sarge Maka and Julia Streetfighter up in attack, who looked like tearing the game away from South Croydon. After 3 early ones though scoring dried up faster than the public’s affection for really any politician that isn’t Bob Hawke. Man could that bloke skull a beer. We clung on like Finland during the Winter War in 1939-1940, led by some miserly defending from Lauren Long Arms and Harold down back. At half time the scorecard was moving slower than social progress in Chirnside Park, a 4-3 score line making for some dull viewing. We continued to move the ball well through the centre, with Georgie and Mads working tirelessly through the guts, but just couldn’t put it on the scoreboard. Like a hot, rich, gentleman that still lives with his parents, we were looking good without scoring. Down 9-7 at 3/4 time, Whiskas did her best to drag us back into the game, while Em Morris up forward was looking like a toaster on the edge of the bath tub; dangerous. South Croydon however were able to take their chances when they came and ran out 14-7 winners. The seeds have been sown for a successful season though and we will look to bounce back next week, when we hopefully play in a suburb that’s not stuck in 1996. Thanks to the Mitcham Yellow team for rocking up early to support & of course the rest of our supporters.

MITCHAM YELLOW - Following straight on from Mitcham Black, the girls were looking forward to turning the club’s fortunes around for the night. Unfortunately for Kilsyth we did exactly that, pouncing on them like a kitten onto an inanimate object. Like a kitten we were full of energy and running rings early. The chief was in full flight, clunking everything that came her way and slotting them from all corners. Dermie was proving to be a more than capable sous chef, and things were getting hot in the kitchen. Like any good restaurant it took a team to deliver the fine cuisine that was our performance. Pod was a running machine through the centre. But not a treadmill, but a machine that is programmed to run, not be run on. Steppers and Scott were tighter in defence than Bluey’s pockets when it’s his turn to buy a round. Santiago and Vladimyr proved to be more efficient wings than those of a hummingbird, which can go at over 80 flaps a second in some species. Efficient may not be the best word, but impressive nonetheless. A polished display saw us take home the Scotch Fingers, and also the win to the tune of 17 goals. And with each goal worth one point, that is equivalent to 17 points. Final score- 25-42.

Thanks to the Mitcham Black girls for sticking around and supporting us as well as the rest of the support crew! Up the tigers!