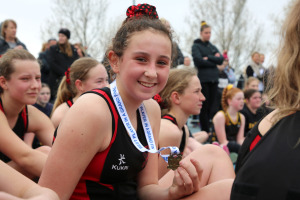 Most of our community will have been informed of the passing last week of one of our junior netballers Zoe Kennedy suddenly due to an asthma attack.

Zoe starting playing netball with her St Roberts PS teammates in 2014 winning 3 back to back grand finals then joining NCFNC with most of them in 2016.

In 2019 she was NCFNC’s first ever Division 1 GFNL junior premiership team Captain and took out a Best In Final medal for this 13&U Div 1 grand final. She also won her team’s Mark West Medal nomination as well as passing 50 club games for NCFNC at the age of 12. She also played in the GFNL league representative 13&U team this same year.

Zoe gave a lot to our club and also had her first year of coaching in 2019 helping out 11&U White.

She was not only a star on the rise but also a great team player, a joy to coach, supportive of our younger juniors, and a true captain, always leading by example.

Thank you Annah, Lachie, Maggie and Ned for letting NCFNC be a part of Zoe’s life. To coach her, play with her and watch her play at our club was an absolute privilege. She definitely has made her mark on all of us forever.

Our thoughts are with you, your families, all her friends and teammates past and present during this time.