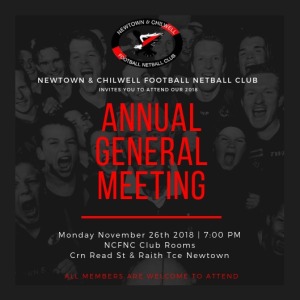 The Annual General Meeting of Newtown & Chilwell Football Club Inc. shall be held on Monday 26 November 2018 at 7.00pm at the NCFNC Clubrooms.

BUSINESS OF THE MEETING

a)    To confirm the minutes of the previous annual general meeting;

c)    To elect the Executive members of the Committee comprising:
i.    a President; and
ii.   up to four Vice-Presidents
iii.   a Secretary; and
iv.   a Treasurer.

Nominations for the positions of Executive members of the Club must be in writing and lodged with the Secretary no later than 7.00pm on Monday 19 November 2017.

Nominations may be sent to PO Box 956, Geelong Victoria 3220 or via email: club@newtownchilwell.com.au