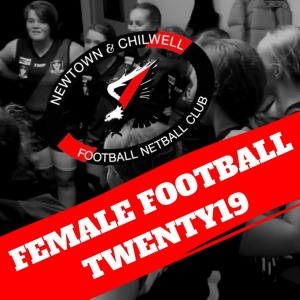 Following a meeting on 13/06/18, the following plans have been drafted. These plans are not confirmed but give us a firm base to push the female football forward into 2019.

We have huge numbers coming through the junior program all the way from Auskick, predicting 2 x U/12, a strong U15 and excellent numbers for our U18 team.

In the next 2 years, the introduction of U10 female football will be well received by our junior female program. By mid-season in 2019, we will have a firm plan to apply for an Open female team for 2020.

Key Appointments are underway with David Wojcinski overseeing the coaching program and Richy Dyer stepping into the football director’s role for all female football.

Key coaching roles are yet to be confirmed we have some great people that have put there hand up to be involved, such as Rick & Nelson Browne, Nigel Lappin, Cam Thiele, Craig Morrissy, Dave Cooke, Blake & Jackie Caracella. Liam Higgins has really enjoyed the 12’s role as coach this year and he is currently assisting in securing his successor for 2019 as he may not be in Geelong.

We will also have a steering committee to guide the entire programme.

We have firm plans to incorporate some senior player attendance at training and involve more parents on a part-time basis so they haven’t got permanent commitments week in week out. These plans will be developed further as we get closer to the 2019 pre-season, parental involvement is paramount for your child’s wellbeing and education on our club’s philosophy.

We are currently developing a plan to recruit, attain and bring outside players & adults into our club environment to ensure we become a force in the female football section of Geelong for next year and beyond.

Thurs July 19th is confirmed with the club that we will conduct training for all females that night instead of the Wednesday and come inside afterwards at 5.45pm for approx. 90 minutes or so to enjoy some of our club's hospitality and we plan to launch our 2019 campaign in the member's room. Dinner Menu is being served with children’s meals available and the bar is open.

All parents of our 3 age groups are strongly encouraged to attend to catch up with others and hear firsthand what we have planned for next year. It may be difficult to get all our U18 girls there as they may be training with their combined team elsewhere.

From Richy & Craig Morrissy and the steering committee