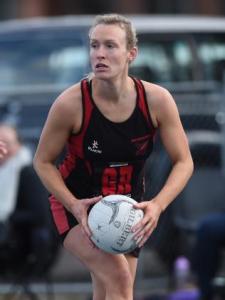 NEWTOWN stalwart Julia Woolley is humble enough to concede she has had some luck throughout her distinguished career.

Three straight premierships with Winchelsea in the GDFL preceded a move to the Eagles at the start of 2013 and from there the accomplishments have continued in extraordinary fashion.

On Saturday she will lead Newtown in its bid for a fifth straight flag and, having gone through undefeated for the past four seasons, the Eagles are chasing win number 98 on the trot.

Woolley said while there had been notable cases of good fortune — including a stunning long-range goal from Nat Tommasini on the siren to claim the 2015 premiership against South Barwon — her teammates had earnt every bit of success.

“We have had a little bit of luck go our way, we’ve had some close games, so we’re very grateful to be in this position,” Woolley said.

“But the girls all work so hard. They are phenomenal athletes and the amount of time they put into getting their bodies right and the strength and condition and their fitness is amazing.

“My sister [star shooter Kath Knott] puts the time into her body to get herself up, so we definitely do the hard work to get there and I think the amount of work that goes into having to get your body right, all of these girls deserve to be there because they do what they need to do.”

Woolley forms half of one of the best attacks in the competition with her sister, who arrived at the club last year after spending time with the Melbourne Vixens.

But there are stars right across the court, including defensive pair Amy Wirth and Jacqui Newton, who have teamed together seamlessly in Newton’s first year in the red and black.

“Amy is an amazing leader from the back and you know where she needs you to be so she can go hunting for the ball, and Nat knows where Kath needs the ball,” she said.

“I have seen how much Jacqui has improved with someone like Amy, she gives so much direction and instruction to the girls so she has done wonders for Jacqui who is young and coming through.

“It is amazing for me to sit back at the attacking end and just watch how well they all play together, but to have those understandings and connections is priceless for us.

“Playing with someone like Kath and Amy, you just have this sense of calm that comes over you to know that at any point it is going to be OK. With Danni Stewart and Nat as well, we’ve got a lot of belief in each other and I do think, no matter what position we’re in, we’ll fight until the end.”

Off court, the Eagles have been proficiently led by Woolley’s husband, Jason, who has also spent time at City West Falcons in the VNL, where several of Newtown’s big names play during the week.

He will be charged with overcoming a fired up St Albans side today in its first premier grand final since the GFNL started.

Woolley, who left the Falcons this year to seek further opportunities with the Geelong Cougars, said she was hopeful the Eagles could do the unthinkable and claim flag number five against the Supersaints after what had been a long year.

“There is a core for us that get to training each week and because I coach the juniors I’m there every week, but we’re just managing injuries.

“It is important at this end of the season that we do finish with fit girls. Hopefully we have had enough training sessions to be ready for Saturday’s game.

“To be able to go five straight with Newtown would be amazing.”