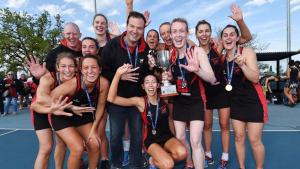 NEWTOWN and Chilwell has etched its named further into the local netball history books, securing it’s fifth premiership victory in as many years.

It was an impressive performance by the Eagles captain who had been in bed since Tuesday with the flu and was sleeping in a car pre game to conserve energy.

“We weren’t even sure we were going to get a quarter out of her at the beginning of the game so to put in that kind of performance was really exciting,” coach Jason Woolley said of his wife.

Natalie Tommasini and Sarah Wolff were dominant in the mid court, executing confident delivery to Kath Knott who shot 45 goals of 42 attempts.

The formidable attacking outfit maintained possession early and set the match up by ensuring they didn’t throw a centre pass away in the first quarter.

In defence Jacqueline Newton and Amy Wirth worked hard to limit the influence of St Albans shooter Tharjini Sivalingam, the worlds tallest netballer, and generated turn overs to help the Eagles extend their lead at every break.

Newtown and Chilwell claimed a hard fought, 23-22 victory over St Joseph’s in the Division 3 GMHBA Cup.

The Eagles had a four-goal lead at quarter time with Joeys only managing to put one score on the board.

In the third break the scores were level and much of the nailbiting final term played out goal for goal.

Georgina Barclay, Jessica Henderson and Nicole Nicholls were best on for the premiership winning side while Eliza-Jane Rundle starred for St Josephs.