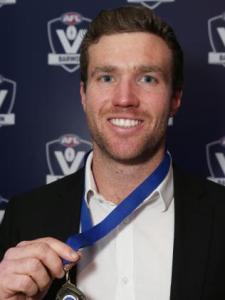 Equal-third last year and a narrow second in 2014, the league medal added to McMahon’s GFL interleague best-on-ground accolade against Mornington and Peninsula in May.

Last night’s vote count went right down to the wire, with McMahon trailing Jarrod Garth (Bell Park), Lech Featherstone (St Joseph’s) and last year’s winner Nathan Deans (Grovedale) with one round to play in the season.

But a dominant display against Lara in the season closer saw McMahon pinch the medal to finish two votes clear of the star trio.

He finished the season with five best-on-grounds and three seconds in a dominant year for the Eagles.

The Eagles onballer had just four votes in the first six rounds, but produced back-to-back-to-back threes to rocket to second in the count at the halfway point of the season.

Only Sam Dobson (St Mary’s) had polled more votes in the first nine rounds — one more, in fact, on 14 — with a stack of players in chase.

But by Round 12, McMahon had slipped into a deep battle, with one vote separating the top five players in the competition.

Deans made his move and when he and Lech Featherstone (St Joseph’s) polled threes in Round 14 to move to 19 and 16 votes respectively, McMahon looked in for a battle.

But another best-on-ground for the star midfielder in Round 16 saw him close to within one of Deans.

Power forwards Garth and Featherstone then joined Deans on 19 votes with threes of their own, with McMahon one off on 18 going into the final round.