GFL 2017: NEWTOWN & CHILWELL LOOKS AHEAD TO NEXT YEAR AFTER COMPETITIVE LOSS TO ST JOSEPHS 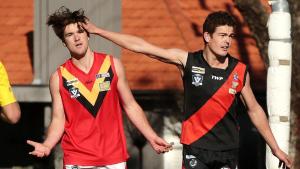 NEWTOWN & Chilwell coach Damien McMahon concedes his side has shifted its focus to 2018 in the wake of a spirited performance against premiership favourite St Joseph’s.

McMahon, in his first season at the helm of the Eagles, admitted the remaining six matches of the season was all about development.

“I spoke to the players after the game and it’s not about the ladder any longer,” McMahon said, lamenting a gallant nine-point loss to Joeys at Elderslie Reserve on Saturday.

“It’s about improving each week, that’s been the overall catalyst for the season, we want to get better week by week.

“We’ve taken some really good gains, but we’ve dropped off at certain times in the season and the key is to be consistent over the next six games and ensure we have something to show for the season.

“We’ve got some games coming up that are really winnable. In the last month we’ve played St Joseph’s, St Mary’s and Bell Park and they are the three best teams in the comp and we’ve had a draw against one of them and gone down by a small margin to the undefeated side in the competition.

“We’re building a foundation for long-term success and I feel like we’re on track. We’d like to be a few games ahead of where we’re at, and we’ve dropped games we shouldn’t have dropped, but the key is to make amends in the next few weeks.

“If we can do that, we’ll still salvage something for the season.”

When asked if his side had altered the focus towards next season, McMahon replied: “Absolutely”.

“We probably said that at the start of the season, to be honest,” he said.

“We knew that we were playing a lot of younger players — first-year players — and history will tell you it’s hard to be a premiership contender on the basis of that but I certainly came here with a long-term view, not a quick fix, and that’s why we’ve invested so heavily in the younger guys.

“If we stick to the task and keep focused on that, ultimately we achieve something.”

McMahon admitted he was pleased with his side’s “never-say-die attitude”, having challenge St Joseph’s deep into the match.

“We kept fighting, we made a lot of mistakes but we’re a young team,” he said.

“We’re making errors in the basic fundamentals of the game and that was the message after the game, we need to improve in that area.

“At the moment we don’t get the balance right often enough, but our endeavour, work rate and ability to stay in the game and the crack-in factor was fantastic.

“Our supporters should be happy with the fact that we kept fighting all the way to the end, but we just weren’t quite good enough on the day.”

“It’s only his second game for the season and it looks like he probably won’t play another game for the year,” McMahon said.