GFL NETBALL BETTING TO START IN 2017 THROUGH CROWNBET 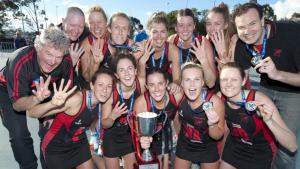 GFL NETBALL BETTING TO START IN 2017 THROUGH CROWNBET

PREMIERSHIP betting will extend to local netball this season in a bold new frontier for gambling on local sport.

Crownbet, which has run local footy markets in the GFL, BFL and GDFL, will push further into country sport when it releases Geelong Football League netball premiership odds on Monday for the first time.

It is believed betting markets have never been offered on metropolitan and suburban netball in Victoria.

But sports odds analyst Wayne Bent said Crownbet had decided to initiate the offer this season, confident in the GFL’s elite standing in Victoria.

“It’s just been talked about the last week or so, to tell you the truth,” Bent said.

“We had a talk about it around the office and we’re more than happy to put up a premiership market for the netball.

“We just think — seeing as we supply a premiership betting market on the GFL, and the netball is closely affiliated with the GFL — it would be a good idea that we put a similar market up for netball.

“And the netball teams go hand-in-hand with the GFL standard. It’s got to be a really high standard to be linked with the GFL.

“We’re really looking forward to see what the response will be like to it. It’s the first time we’ve ever tried it but we’re happy to supply this market and see how it goes.”

Bent believes the market will provide as much interest as the local football markets do.

“Especially when you guys (sports journalists at the Geelong Advertiser) bring out your tips, who you think will finish top five, who’s going to improve and all that sort of stuff,” he said.

“I assume it will be a talking topic on Thursday night and Friday night at the pub between the boys.”

Crownbet will not run netball markets in these leagues this year.