AWD Round 4 versus Botany Bay Pirates 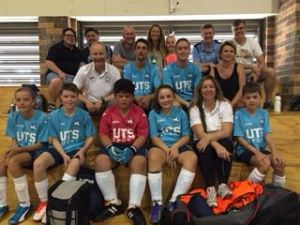 Well done team on your first win of the season, a 2-2 victory over Botany Bay Pirates. It was a hard game against some big opposition, we defended and attacked when we needed to and stayed with the game plan. Everyone held their positions and there were moments when we had to dust ourselves off and start again. We kept the pace going until the finish and it was a pity our first goal was not allowed, it was a great set up  and attempt.

Mali - The only girl playing today very BRAVE  held her own amongst  the boys, great ball passing down the side.

Jackson L - “The Pocket Rocket” darted around the court while holding his position, passed ball out to team mates helped set up goals

In summary and to quote Kyle “So proud of the team”. Thank you to the families and supporters for coming along each week and looking forward to next week’s game, which is our first home game alongside the rest of the club.