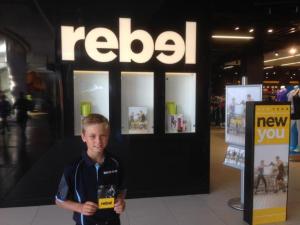 The Rebel Sports ‘scouts’ have been out and about and have been impressed with the Football and Futsal achievements of UTS’s very own Jordan Devries (Jordy). Jordy’s own Facebook page says it all:

“Super stoked! Rebel Sports just gave me a $500 gift voucher for my success in Futsal & Football this year. Massive thanks to Kent Lunney and Rebel Sports”.

When asked for a comment, UTS 12 Boys Coach Danny Beauchamp said that:

”Great news for Jordy boy. Jordan has had a fantastic 2014/15 of Futsal, first by being  the youngest squad player in the under 12s state league runner up in 2014 and then playing a crucial role for the UTS under 12s and 14s teams for this Premier league season. Jordan was also awarded the Grand final MVP in the Australian Futsal Association Nationals competition were his team ‘NSW City North’ were crowned champions of Australia after Jordy scored the winner in golden goal extra time. Jordy is a very talented player and I’m sure if he works hard, his success will continue”