Preview of Round 11 UTS Northside versus Inner West Magic 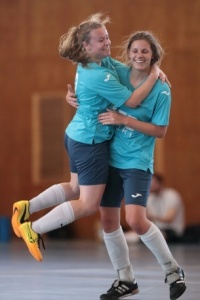 After a short absence the Mystery reporter is back! UTS Northside entertain Club Championship 2013-14 winners and 2014-15 leader Inner West Magic to the Sydney Academy of Sport for Round 11 of Football NSW Premier League.

PRE ACADEMY & ACADEMY - Kick off 12pm: The day always starts with our non-competitive fixtures with the Pre-Academy and Academy teams playing side by side. This should be a brilliant showdown between two great clubs who are renowned for their junior talent. The only logical thing for anyone who has any interest in the round ball game could do is get down and watch this next generation of superstars.

12 BOYS - Kick Off 1pm: The 12 boys begin competitive fixtures for the day and are definitely in for a tough game. Inner West under 12s sit top of the table with 10 wins from 10 games and are rightly favourites. It’s 1v7 on the table but saying this; UTS have developed quite a strong rivalry in this age group lately and will be looking for GK Declan Annear to keep out the talented magicians.

13 GIRLS - Kick off 1:50pm: It’s all or nothing this weekend for the 13 Girls as they try to stay in touch with the top four. After a disappointing loss to Phoenix two weeks ago, the girls bounced back with a great 3-0 win over Mascot Vipers to sit 6 points outside the four. Magic are no slouches though, as they sit 3rd in the table and boast the best defensive record in the league. Coach Marty Judge will have to pull something out of the fire this week and will be looking for in form players Clementine Cole and Pascale La Hei to lead the line.

14 BOYS - Kick off 2:40pm: We move onto Northside’s most entertaining team in the 14 Boys. This team possesses the most goals scored in the club (with 38) and have been in some extremely high scoring games this season. After pulling a draw in the final moments against Mascot last week, the boys under the guidance of caveman Jack Richardson will be looking to avenge their 5-4 loss last time out. It’s 2V5 on the table. Can Ben Varvaressos keep up his goal scoring record? Can Harry Oates continue tackling players twice his size? Can Calem Nieuwenhof continue to beat players from all parts of the court? We will find out.

15 GIRLS - Kick off 3:30pm: In what could be match of the day, it’s 3v4 on the table with the UTS’s 15 girls having something to prove. After a 7-1 hammering by Inner West last time around, the girls will need to switch on if they want to create a 5 point gap between them and Magic and literally seal their finals berth with 3 rounds to go. The girls will look to GK Kristen Mihalarias and dynamic duo of Emma Watkins and Genevieve Tucker to try and seal the three points.

16 BOYS - Kick off 4:20pm: The 16 boys have been struggling as of late. Sitting in 8th place and with many players stepping up and putting strong performances for the Youth men’s team, they need to start bringing that from into their own games on Saturday. Aaron ‘Berbatov’ Peters will lead the line for the team as he remains top goal scorer, chief entertainer and continues to make a number of guest goalkeeping appearances. It’s also only a matter of time before new recruit Louis Baker starts to find his futsal feet (Size 12) again. The boys snatched a 3-2 win out last time and will be looking for the same again come Saturday.

17 GIRLS Kick off 5:10pm: The pressure escalates for the 17 girls. Sitting 5th and 2 points off 4th place Magic, Saturday’s game could play a pivotal role in the make up for the top four. A loss could derail their finals aspirations but a win will send them back in the top four with three games remaining. These two teams have played out two thrillers this season already with UTS triumphant in the semi finals of State Titles and a 2-1 win in round 4. They will be looking to GK Nadine Knight (who made her debut in Open Women’s last week, with a clean sheet) to continue her great form and will also look to the goal scoring Nike boots of Alexia Guerinoni and Ally Green to collect the 3 points in this one.

YOUTH MEN - Kick off 6:00pm:A snatching defeat from the jaws of victory. This would be a good summary for this year’s Youth men team who yet again chucked a good lead away last week to go down 4-3 to Mascot Vipers. While this team sits in 8th position, they have only been outplayed twice this season but continue to lose concentration in important periods throughout the match. Emotion, stupidity and testosterone are always on the cards for the Youth Men age group so I wouldn’t miss out. After a strong 4-4 draw last time out against Magic, Coach Grant Lunch will be looking for a repeated effort this time from his depleted team who will be hungry for points in these last coming rounds. Cameos from Brendon ‘Toe’ Zappia and Nick ‘Jell’ Bersee.

OPEN WOMEN Kick off 6:50pm: It’s Open Women’s time and what a match up we have in store for you. UTS broke their winless run last week with a 3-1 win over Mascot Vipers to sit 7th on the table, 8 point behind 4th placed Magic. A win this weekend would keep their slim finals hopes alive but they need to overcome their goal scoring issues immediately. Inner West got up 3-2 last time but our girls from the Northern beaches will be looking to exact some revenge this time around. With plenty of our player’s represented on the coaching staff it is not a game to be missed.

OPEN MEN Kick off 7:50pm: To finish the day off we have our Open Men’s team who have recently found some form with two narrow wins over Phoenix and Mascot. Coached by Gareth (or Garth) Naar the boys have shown great fighting spirit all season to sit equal 5th on the ladder. They sit 9 points behind 4th placed and powerhouse Magic who boast more than a handful of Australian internationals and an x- Australian coach but nothing less of a win will keep their slender finals hope running. The lads completed the upset of the season with a 6-3 win at valentine Sports last time handing Magic their only loss of the season. UTS will need a few players to stand up and will be looking for player-coach Martin Judge who was the 2 goal hero last week (and collected the miss of the season) to continue his goal scoring form. Our Japanese connection of Taka Iwata/ Jun Arima and Mitomo Somehara will have to be on telepathic wave lengths once again and GK Gerard Marino will need another outstanding game to keep the attack of Inner west out.

YOUR SUPPORT PLEASE: With this the being the last game for 2014 and our last of four home games on the bounce, UTS is counting on the support of our friends, family and junior players to come make some noise and make Narrabeen a fortress this weekend. With our senior games attracting some good attention and crowds the last couple of weeks, we are looking for some Christmas cheer. So bring the kids and the drinks down and come enjoy what will be a fantastic day of futsal.

AT THE END OF THE DAY: Following on from all the day’s events, all parents and players are invited back for some drinks and dinner to the sands hotel to finish off a great 2014.

Enjoy the Day... The Mystery Reporter.