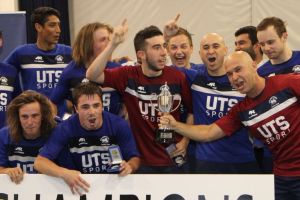 UTS Teams do the club proud at State League Grand Finals, a great way to end the season.

Futsal players and fans went through all the emotions expected of a dramatic grand finale as the Football NSW Futsal State League took a bow in style at Dural Sport & Leisure Centre.

Sydney City Eagles 12 Boys finished off an amazing summer with a 3-0 triumph over UTS Northside to make it 13 straight wins, plus a premiership and championship trophy.

A Luis Ferreira drive through traffic lifted City in front on the quarter-hour and two second-half own goals sealed the deal, but the scoreline barely reflected how the game went.

UTS were full of early pep and Ben Allen and Jaylin Rae latched onto good opportunities, the first shot drifting just wide and Rae’s great run up court spoiled by Eagles keeper Marley Beeston, and Jake Hollman was getting through a mountain of work in attack and defence, his clever lob to find Harry Oates at the far post almost produced the opening goal.

Sydney found their groove and a sweeping team move up court needed saving by Northside keeper Levi Kaye, as did a slinky run from Jacob Vasiliou a minute before Ferreira’s definitive opener.

The Eagles were flying as they closed out the half with strong chances from Ferreira, Michael Osei-Adamako and Jayden Calver but the whistle sounded with City clinging to its 1-0 lead.

Tragedy struck UTS shortly after the restart when a wayward cross bounced off Hollman’s back into his own net and Sydney led 2-0, but the young northerners sparked into action and Mitchell Mattison went close to replying as Kaye did his best to keep his side in it with some outstanding stops.

A great look from Oates to Mattison called Beeston into action and the Eagles custodian did well to jump on Lucas Rainbird’s blast and, as the clock ticked down, UTS were forced into a fifth-man press to try and find a way back.

Unfortunately the tactic didn’t work as a moment of calamity at the back saw Beeston’s full-court kick bounce into the UTS goal to secure a 3-0 final scoreline.

Ferreira was stoked for his team: “I think we’re just relieved to finish a really good season the right way,” he said. “UTS have some really good players, but we’ve been playing strong second halves all year and did a good job again today.”

Eagles coach Sam Perre congratulated both sides for a hotly contested summer: “It was a very good win for us,” he said. “UTS were our toughest competition all year and we managed to hold them out well today. The boys lost the premier league [12s] final to Magic last year, so it was good to win this one.”

UTS Northside completed a 16 Girls premiership-championship brace with an enthralling 6-4 win over an unlucky Sutherland Futsal.

Northside began briskly with Arrowsmith and Philipson both signaling their intentions directly but it was a brilliant pinch and drive from Madeline Fox that gifted Shire a sneaky 1-0 seventh-minute lead.

Sutherland almost added to their advantage through Emma Watson and then Reagan Deeley but UTS grabbed their equaliser when Genevieve Ingham crossed and a collision between Shire keeper Mikayla Cecere and a defender saw the ball rebound off the post into the path of Genevieve Tucker for the simplest of tap-ins on the quarter-hour.

Sutherland were back in the lead a minute later after Deeley’s leftside run and pass to Hards at the back post ruffled the netting for a 2-1 break, but the Northside response came quick as Arrowsmith followed up a dangerous freekick with a powerdrive that leveled the scores at 2-2 a minute out from halftime.

The southerners were back at it in the second term, Hards nicking the upright and then forcing UTS keeper Tessa Wicks into a great save, but a 25th-minute counter from the northerners gave them the ascendancy with Ingham blazing past Cecere for a 3-2 break.

Cecere proved the catalyst for the next goal as a quick throw up court saw an off-balance Aston to get a deft touch on the ball to glance it past Wicks for 3-3.

The momentum swung back to UTS when Tucker crossed to Phillipson to pilot home a 4-3 edge and another one-two between the dynamic duo resulted in a second Phillipson goal to make the score 5-3 10 minutes from the end.

Sutherland stepped up a gear and Charlotte Reba found Deeley with a neat pass but Deeley’s volley crashed against the left post and out before Cecere conjured a brilliant double-save to keep Shire in it.

Five minutes from fulltime Hards trapped, turned and fired across goal to the farside netting to reduce the deficit to 5-4 but a magnificent fullcourt pass found Arrowsmith on the burst and her finish consolidated a commanding 6-4 advantage with just a couple of minutes to play.

Busy Bridget Booker summed up the feeling in her team. “That feels really good!” she said. “It was so intense at times and we just told each other to stay calm and we knew we’d come through in the end.”

Cathie Sweeney’s daughter Bethany was filling in as coach and gave it to the Shire juniors. “For a team that’s won so many games this season I thought they deserved it, but I knew it would come down to who won the second half,” she said. “Sutherland are so strong and physical so we had to stay composed and play our game.”

There was no stopping UTS Northside in the Open Women’s this season as they ran away from a gallant Mount Druitt Town Rangers 4-1 to enjoy their 13th straight win of a remarkable summer.

UTS knew it would be tough with tender 3-2 and 1-0 wins over Rangers and both sides created excellent opening opportunities, a Mia Vallieres strike for Mount Druitt pushing UTS keeper Elise O’Kelly to her limit before a sweet backheel touch from Ellen Wheatley set up a running Ariella Cabezas but her shot from outside the Town D deflected off the post.

Northside broke through on the quarter-hour after a great lay off from Isabella Walker on the left found Bryany Parker at the top of D and she shot true for a 1-0 advantage.

Majik were doing a mountain of defensive work as University enjoyed most of the possession and running, and their stubbornness paid off when a O’Kelly full-court throw hit Natalie Penman, her low shot ruffled the net for an equaliser against the run of play.

The deadlock didn’t last long as Northside’s Bethany Sweeny slammed in a freekick home from 10m in front to restore uni’s lead, and UTS keeper Nicola Simmons was excellent in rejecting Stefanie Travato and Vallieres just before the first half drew to a close.

Uni came out firing in the second stanza and a great turn and shot from Cabezas pushed Northside further in front, 3-1, Tess Olsen forcing O’Kelly into a good save before the resulting corner deflected off a Rangers defender and the post.

Taryn Rockall had a good attempt in front of goal but UTS were well in control, a cheeky Sweeny chip pass to Ellen Wheatley on the burst ending with a superb tip over the bar from O’Kelly moments before Sweeny’s slightly off-target shot received unlikely help with a slight glance off a defender into the Mount Druitt net for a 4-1 Northside advantage.

Town never gave up and an O’Kelly save from a sharp Olsen strike lifted Rangers for a final tilt, Penman, Rockall and Beth Watling all going close, but the fulltime whistle blew with UTS deserved victors.

There wasn’t much for Sweeny to say after a fantastic Northside season ended perfectly. “We felt pretty comfortable throughout the match, but we’ve had the team together for a while and really enjoyed playing together,” she said.

Danny Beauchamp took over the coaching reins halfway through the season and shared the team’s delight. “It was a good performance from the girls, they dominated in patches and did everything right to win,” he said.

Two goals in the last two minutes helped UTS Northside over the line against Raiders in a gripping Open Men’s contest, UTS coming from third place to win an epic championship.

A full-court throw from Raiders glovesman Soner Omac found Adam Savetta and his first-touch volley sailed just over the bar before UTS finally got going, Josh Yeates and Shane Watson shooting just wide and Omac tipping clear a Yeates low drive to show this title was up for grabs.

A cheeky Yeates backheel glance almost undid Omac only to trickle just past the post, and Ibrahim was just as busy at the other end before UTS came alive, Raiders having the last first-half laughs when a neat combination between Savetta and Slaven Ljuboja forced Ibrahim to block, while Chris Bascur broke free and shot wide with only the keeper to beat to end the action.

Grant Lynch laid off to Yeates to start the second period with Omac charging out and executing a brilliant reflex save with his leg to keep the scoreline unchanged, Jovan Miladinovic belting a crisp Chris Bascur pass up the other end for Raiders that required a tip-clear from substitute UTS keeper Alex Pepper.

Pepper’s face got in the way of a Slaven Ljuboja rocket moments later and he used more conventional methods to brilliantly parry Savetta’s sharp shot on the half-hour, and at the other end Omac denied Yeates once more and blocked a Louang-Amath rocket as Raiders also looked for a decisive blow.

Two more Bascur attempts needed saving from Pepper and only Omac’s legs stood in the way of a Fisher bomb from range, the Raiders keeper outstanding in a diving save to snub a Nathan Amore shot not long after.

But just as the game seemed destined for extra-time Lynch showed tremendous skill to turn a Raiders defender, touch left then bury a great shot high into the net for a belated 1-0 UTS edge.

Seconds later and Lynch dished a great ball across to Amore on the right who hit low for a good counter attack goal and handy 2-0 lead seconds from the final whistle.

Raiders went to a fifth-man press and Pepper did well to tip over a targeted Slaven Ljuboja long-range effort, producing a couple more stops to ensure Northside’s victory.

Yeates couldn’t believe the game’s ebbs and flows and thanked his team-mates for a memorable summer.

“That’s grand final Futsal for you,” he said. “We had a bit more depth on the bench than they did, so we just maintained a high intensity and it was always going to be tough for them to keep up at the dn.”

“We’ve stuck together through thick and thin, and we’ve made it very competitive for each position but we’re also very supportive of each other.”

UTS coach Argisht Sarkizians said his troops were looking forward to their step up into premier league next season.

“The competition was fantastic this year and it’s always a tough game against Raiders; I just trusted our defence to hold them out because we know we can score goals,” he said.

“This team is a bunch of top blokes who’ve been playing together for a decade, and we’re all excited about playing in the higher division.”