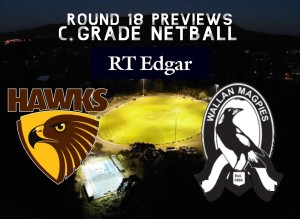 LAST WEEK
Woodend/Hesket – lost to Diggers Rest 23-32 in a game where the Hawks were within three goals of Diggers at numerous points of the match but just couldn’t maintain their intensity to take a big scalp.

WHY THEY WILL WIN
Woodend Hesket – the team is determined to finish the home and away season with a win against Wallan, knowing that they have given of their best throughout the season any may just miss out on finals.

Wallan – will want to hold onto 5th spot on the ladder and show the Hawks they deserve to be in the finals.

Woodend Hesket will finish the season off with a strong win against Wallan, knowing that they beat them earlier in the year and that the Hawks play their best netball at home. A big crowd at the netball will provide all the support required to get the team over the line.