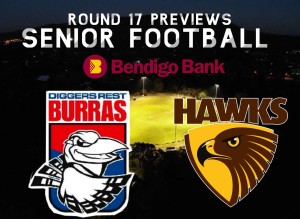 Talking Point
Diggers Rest - will we see the best of this team before finals, or have we seen big glimpses of that already after its big win over Macedon in its last outing? With its last two matches against teams out of the top six, it is looking more likely that we'll see the 2014 and 2015 Grand Finalists play off in a bumper Qualifying Final to start finals in 2019.
Woodend/Hesket - it is officially looking for applicants for the Senior football coaching position. With a healthy list filled with solid potential, does the club explore a playing coach for the third time in a decade (Cook, Sleight and Carland) or does it return to a non-playing coach? Does it look to a current coach that is looking to move on at season's end or someone untried?
Last time they met
After leading by just two-points at the opening change, Diggers Rest gradually extended its lead at the end of each quarter to record an entertaining 30-point win in Round 6, 15.10 (100) to 10.10 (70).
Luke Delahey was outstanding for the winners while Marcus Stapleton was brilliant in the ruck for the Hawks.
Form
Diggers Rest - it has won its last three matches and is building some solid momentum heading intp the finals.
Woodend/Hesket - it has split its results in the last month of games with some solid performances against Romsey and Macedon in that stretch.
Why they will win
Diggers Rest - it is looking to finish the season as it started with a good run of wins. It is started to get back to some of that electrifying touch that saw it win the flag in 2018. Wins over Macedon and Rupertswood in the recent run of wins is outstanding for the cause.
Woodend/Hesket - it played its best first half of the season last week against Romsey with ruthless attack on the ball and unrelenting pressure. Diggers Rest has never really gone into its matches against the Hawks with a great deal of confidence in recent years and that was highlighted with the Hawks winning against it at home last year. The Hawks do match up well in some areas.
Who will win
Despite Woodend/Hesket's eager to land a scalp before the season comes to an end, Diggers Rest will be too strong and secure a strong win at home.
Impact of this game
If Woodend/Hesket can cause an upset, Diggers Rest could slip from second to fourth.  Rupertswood have the bye and the winner of Wallan and Riddell will move above them should it happen. If Diggers Rest win and Romsey lose to Macedon, it will move to top of the ladder.