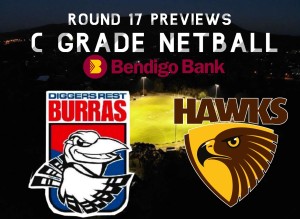 TALKING POINT
Woodend/Hesket – will need to bring their A game to cause an upset against Diggers and remain in touch with the finals.
Diggers Rest – will be looking to consolidate second place on the ladder

LAST WEEK
Woodend/Hesket – defeated Romsey 39-29 in a tight game until the last quarter when the Hawks pulled away.
Diggers Rest – had the bye

WHY THEY WILL WIN
Woodend Hesket – with Broadford scoring an upset over Central last week and sitting below the Hawks on the ladder but with a higher percentage, the team will need to play their best netball for four quarters. The team is determined and positive and anything is possible.
Diggers Rest – will be confident knowing they beat the Hawks by 11 earlier in the season