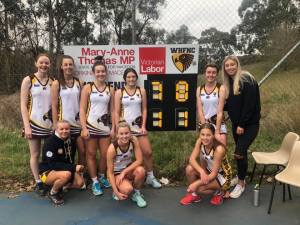 Read up on how our 17 and 19s netballers performed over the weekend.

The 17’s girls started their finals campaign with a victory over 2nd placed Gisborne Rookies to advance straight into the Grandfinal!!! WOOHOO!!

The girls didn’t have it all their way though and had to really dig in to get over the line.

The first quarter was tight with neither team wanting to give an inch. The Rookies were looking strong and the Hawks girls were uncharacteristically hesitant with the ball, but still one goal up at the first break.

The weather turned going into the second quarter as the drizzle started to make an impact on the skills on court, with a slippery surface underfoot and on the ball. We were struggling to find our rhythm in defense without our key GK (out injured), as the ball was easily turned over and converted by the Rookies as we tried to bring the ball down the court.

Our structures were all over the place as we found ourselves down by 2 goals going into the 3rd and something had to change fast. We knew that our attacking end was holding strong but we needed to sort out the midcourt and defensive end as our combinations were not working.

Madi Kleiner was shifted from centre into the GK position to provide the height and the pressure we needed and Amy Duff was taken from WA and put into Centre. These two changes proved instrumental with additional pressure applied through the court and under the ring.

Our structures improved, the feeds into the shooters strengthened, and Amy, Emma and Madi worked to apply pressure and create turnovers. We broke free and pushed our lead out as the quarter rolled on. Sarah Duff and Gemma Baird continued their great partnership in the goal ring to convert close to the post, scoring at a fantastic combined 88% accuracy.

This was a great test for our team in trying conditions. Well done team for digging in and getting the job done, a grandfinal berth is a great reward for you outstanding season. We need to put the game behind us, train hard and focus on the performance we want to put out there for the big dance. Bring it on! Go Hawkies!!

The 19’s team hit their straps for their biggest win of the year, beating Romsey 78-12.

The girls were strong right from the start to the finish with a powerful 14-3 start, however, we knew that we could push harder.

It was important to focus on our team targets and not the fact that we were winning by such a large margin. Macca was instrumental in driving our teams goals, setting a very high standard for the girls to strive for. Sarah was moved out of the midcourt and into the GA position to team up with Gemma in the ring, Gracie was shifted into WA and Macca came on in WD.

Amy stayed in Centre and Abbey and Jess continued in defense. This was a very powerful combination as we piled on 26 goals in a single quarter of netball!! With Shae Denahy out with a hand injury, we took the opportunity to bring young Alice MacDonald-Myers on, Alice came up with a fantastic centre pass intercept within seconds of taking the court and definitely held her own out there!

Macca also provided some great highlights throughout the match, winning the ball after a 1st, 2nd, 3rd and 4th effort at the turnover and a great balancing act on the ring to keep the ball in possession!

The girls pushed through the last half of the game with continued intensity to achieve a much improved scoreline than the first round against this team. It was outstanding to see the girls maintain their focus for the full game even when winning by such a large margin. This is important, as we move towards finals where our intensity needs to be high from the first whistle till the very last.

Every single player gave their all, Gemma Baird was outstanding in goals, providing great body position for the feeders and scored 52 goals, Sarah Duff worked hard out front to bring the ball down into the attacking end and feed the ball to Gemma as well as shooting 25 goals with high accuracy, while Gracie Reid was fantastic in the midcourt, turning over plenty of ball, driving hard on to the ring with accurate passing into the shooters advantage space.