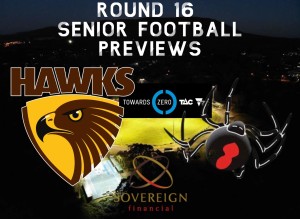 TALKING POINT
Woodend/Hesket - it has lots to play for before the season finishes out as it aims to attract a big fish to take this list into the 2020 finals. Tom Carland has done a remarkable amount of work with this list and if it stays together for 2020, it will be a force because the younger players have had a season to develop and grow into more mature players against stronger bodies. Many expected this list to make finals this year, but despite that failure, quality young kids have had the chance to shine.

Romsey - it appears that it has recovered from a tough slump and looking to regain its mantle as one of the major premiership threats. Perhaps the loss to Riddell was more of a reflection of how well that team is going because Romsey certainly showed a lot of class and poise in its 176-point win over Broadford last week.
LAST TIME THEY MET
The Round Three meeting between the pair was the beginning of the end for Woodend/Hesket's season. Trailing by 13-points at quarter-time, the Hawks were demolised as Romsey kicked 20 goals to four in the remaining three quarters to seal a surprising 116-point win.

Romsey may have been favoured to win that game but the Hawks had a lot of high hopes for the season and it was crushed. It never really recovered. Mitch Jensen kicked seven goals for the winners while Ben Toman was the best for the Hawks. Both players are no longer at the club for various reasons.
FORM
Woodend/Hesket - it ha split the results over the last month with solid wins over Centrals and Lancefield to add to its competitive efforts against Rupertswood and Macedon. It has improved in the second half of the season and last week's effort of holding Lancefield to just four points in the second half was its best effort in defense for the season.
Romsey - it has split its results in the last month. Its efforts against Wallan and Riddell will hurt and it needs to perform well against teams who will play finals. It has that chance with matches against Macedon and Riddell to close out the home and away season. How it performs in those matches will be vital.
WHY THEY WILL WIN
Woodend/Hesket - Al Rae has been a force up forward in recent weeks and the use of Dan Toman at half-forward has been a master-stroke. To have someone of his ilk play at half-forward and direct ball entry into and around the forward 50 is outstanding. He could be tagged by Nathan Rayment or Nathan Blair in what will be one of the great match-ups of the day. If Toman gets loose, look out.
Romsey - Jack Jedwab has a habit of playing well against the Hawks by kicking plenty of goals and being a match winner. He is hard to match up on and will be hard to stop. Teaming up with Ben Way, the twin-towers will cause headaches for a shorter Woodend/Hesket defense.
WHY THEY WILL LOSE
Woodend/Hesket - its midfield will struggle to compete with the forward pressing A Grade midfielders of the Redbacks who have so many avenues to goal outside the forward 50.
Romsey - it lacks the venom and polish that it had mid-season and is still trying to find the right combinations to set itself up forward. Woodend/Hesket's forward line has been fairly positive in recent weeks and perhaps the move of Jedwab from the backline to the forward line could hurt.
WHO WILL WIN
It is hard to see Romsey dropping this game. Woodend/Hesket would dearly love a scalp before the season reaches an end but it won't happen in this game. Romsey have a massive six weeks ahead following this game. What it achieves here will be vitally important on whether it plays four games and makes the Grand Final, or go the hard way around. This result is massive.
IMPACT OF RESULT OF THIS GAME
If Romsey lose, it will have massive ramifications. If it does, and Riddell beat Rupertswood, it will drop to third, and if Wallan can make up 42-percent in percentage between its win and Romsey's loss, it will slide to fourth.
The tip is that Romsey finishes this round on top of the ladder as it faces Macedon and Riddell in the coming weeks. This top six will be a heart stopping finish.