Round 15 Review | B Grade Netball 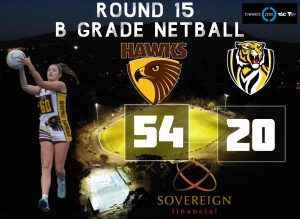 With 15 rounds of the 2019 season played, the Woodend/Hesket B grade team played Lancefield for the second time this season.

Knowing that Lancefield’s journey has also been hard in this grade, the Woodend B grade team also knew that they were a higher skilled team and this game was ours.

Having done the research of our previous game which also included the Lancefield style of play, the opening game line up was to have an impact and allow all players to get on the court and work towards a win.

Emily Lindner who has been consistently scoring well, took the GS position and remained there for the game. Captain, Bonnie Thorsen who has been playing in defence over the last couple of weeks, returned to the GA position. This allowed her to move and be a more contributor in the attacking end and within the circle.

Chelsea returned from injury and took the WA position and with Amy Duff running centre, the momentum of the ball in the attacking end was rewarded with goals that both Bonnie and Emily scored.

In the back-court, Tegan took up the WD position, while Taylor and Claire Klusik took ownership of the Lancefield shooting circle.

With clear instructions to keep possession of the ball by making every pass count and every pass connect to a team mate, this resulted with scores going on the board. All seven defenders with arms on the pass, doing the ground work on Lancefield’s first lead, and more arms on the pass if an interception wasn’t achieved, did result in an increase in errors by Lancefield.
At quarter time, Woodend/Hesket was up by 12-goals.

With this margin, it allowed Bonnie to be rested and Rylee to come into GA.

It is the first season Riley has been playing for Woodend and with an early season injury, incorporating her style of play into the B grade team has taken a while. However with Riley’s speed in the circle, drawing away the defenders, this created visual space for the mid court players to pass the ball in to the shooters.

Throughout this second quarter, evidence of improvement in the attacking end appeared on the scoreboard. Amy Duff and Chelsea worked continually, offering first leads and when required second leads. Their feeds into the circle were clean, clear and successful.

With a 22-goal lead, this lineup continued into the third quarter. For the defenders, Taylor and Claire, ensuring their distance was legal to stay in play and available for rebounds was the main objective. With more success than infringements, Taylor cleared out into the centre third which allowed Claire to clear the backline with one dynamic pass.

Tegan was busy all game, preventing the WA from being in a position to feed well, applying physical pressure and then attacking down court.

In the final quarter, Bonnie returned to court in GA. The umpiring in our attacking end had already shown that equal contesting was going to be allowed. So with Emily and Bonnie’s height and strength, we knew this would be a successful combination.

The B grade team had a goal for the season and that was to have four wins. Well ladies, you’ve just won your third game for the 2019 season.

I am pleased of your performance. Keep working hard,  concentrating on your job on the court, come to training to train together and strengthen our weak links. Go Hawks!