ROUND 15 PREVIEWS | A Grade Netball 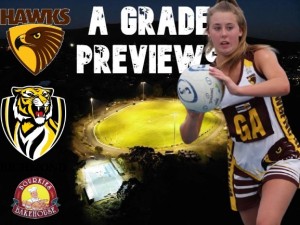 Talking point
This A Grade game against Lancefield is not won until 4 x 15 minutes quarters are played out. A team of ten, to out play and out smart Lancefield. A team to draw on all their game experience while keeping a cool mindset to create a win with every pass and lead made.

Previous round
Woodend-Hesket: The game against Macedon was great preparation for round fifteen as athletic defenders shut down the leads and passes in the attacking end. However, Woodend-Hesket was not overwhelmed as they continued to work themselves out of Macedon’s visual pressure.
Lancefield: played Rockbank and only loss by 21 goals, final score 48/27.

Why are they going to win?
Woodend-Hesket: Looking at the overall performance of the 2019 season, Woodend-Hesket has played a stronger standard of netball. With Woodend-Hesket sitting currently ninth, its players will play as they need to and are as required as a team.
Lancefield: Has had a hard season with no wins. However their loss margins against certain clubs are similar to Woodend-Hesket. Lancefield will come out extremely strong with nothing to loose and everything to win.

Who is going to win
With a combination of physical and mental application, Woodend-Hesket is going to lift their standard of play and earn the win.