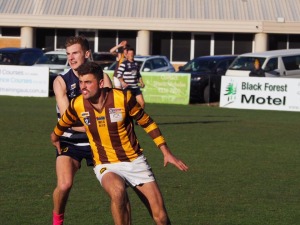 Talking point
Woodend/Hesket - it is on the look out for a new Senior coach to lead this group into the next big chapter of its proud history. It is a testament to Tom Carland and the club to finish out the remainder of the season together and expect this list to finish the season strongly.
Lancefield - it held a very important meeting in regards to its future as a club going forward earlier this week and it is hoped that the community and surrounding areas really buy in to the next big chapter that this club will enjoy. With an exciting group of netballers and talented younger players coming through at junior level, the future is in exciting one for this club going forward and the foundation is there for more volunteers to take it forward in a successful direction.
Last time they met
The pair met in the season opener at Lancefield. Woodend/Hesket led by six-points at the opening change before kicking 16 goals to two after quarter-time to win by 100-points. Tom Gawthrop kicked seven goals for the winners while Joel Badger impressed for the Tigers.
Form
Woodend/Hesket -it has won three of its last five games since its Round Eight loss to Riddell. The form has turned around and it's looking to finish the season on a high. The final three weeks loom as massive challenges with Romsey, Diggers Rest and Wallan all set to make its final preparations ahead of their respective finals campaigns.
Lancefield - it ended a testing losing streak with an impressive 94-point win over Rockbank on the road. It was an outstanding effort by the group with Phil Kaufmann kicking three goals and Luke Malone at his sensational best.
Why they will win
Woodend/Hesket - its form has been solid and its midfield is starting to click well with a strong forward line looking to generate something special. There is big wraps on the pairing of Liam Bianco and Brandon Nicholls to get back to their Under 18 glory days where they would dominate on the scoreboard alongside fellow team mate Tyson Chapman. The trio represent the future of the club and this is the big stage for them to step up in front of an adoring home crowd.
Lancefield - it will see an opportunity here to make the game a great contest. With the Malone's on fire, Bowden and Bell impressing, fans will see a much improved effort from this group as it looks to finish the season on a high.
Why they will lose
Woodend/Hesket - it will underestimate Lancefield's midfield who could catch its defense off-guard with some quick goals against the run of play.
Lancefield - experience and depth across the ground has been a challenge across the year and that doesn't change here. That win last week definitely helps with its confidence.
Who will win
Woodend/Hesket will be too strong from the opening bounce and seal a solid win and give itself some confidence heading into the final few weeks of the season against tough opposition.
Implications on the result of this game
The result won't impact ladder positions too greatly. If Lancefield and Romsey both win, Lancefield will move up to ninth. If the Hawks win and Centrals lose by a big margin, it could move to seventh.