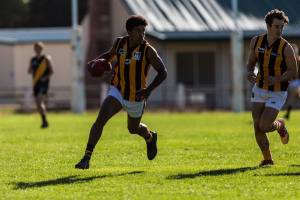 TALKING POINT
Woodend/Hesket - after two scheduled byes, how will this squad be placed in the run home towards finals? It currently sits in second position with two teams outside of the top four hoping to sneak into finals. How bad is the last two weeks off in regards to preparation?
Lancefield - has yet to taste victory this season but hoping to finish 2019 full of running.

LAST TIME THEY MET
This is the fourth meeting between the pair this season. The Tigers played host to the Hawks in Round 9 where the visitors won by 55-points. Harley Giddings kicked four goals for the winners while Will Bell was outstanding for the Tigers.

FORM
Woodend/Hesket - it has been an interesting month for this team. After losing to Diggers Rest, it bounced back to inflict Rupertswood's first defeat of the season, and then lost to Centrals. It has now had two weeks off. Its run home will be tough heading into finals but the team won't want it any other way.
Lancefield - comes into this game off a bye. It lost to Riddell in its last outing and it had a bye. It has been a test for this team who have played twice in the last month.

RESULT OF THIS GAME
Woodend/Hesket must win this game, and it should. The teams below it will have a fight to the end when it comes to making finals.
If Rupertswood beat Centrals as expected, it may take it out of the race towards finals. Aside from Centrals, it may come down to Diggers Rest and Wallan as to who sneaks in for that fourth position and if the Hawks buid some good touch in this game, it will be hard to beat when it takes on those two teams in the final two rounds who need wins over the Hawks to maybe make finals.