ROUND 14 REVIEWS | B Grade Netball 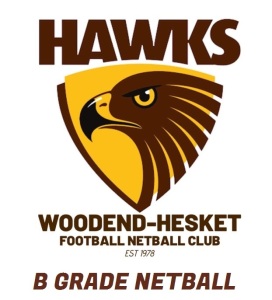 Throughout the 2019 season, Woodend/Hesket's B Grade team has had at times, a problem with the availability of players due to work, injuries and illness. This was again the case for the Round 14 game against Macedon.

With Emily Lindner consistently scoring well throughout the season, Rylee Koutras joined her in the shooter circle.

The Hawks worked solidly from the opening quarter by creating leads for passes to be received. The ball was moved around in a forward attacking manner and goals were being seen on the score board.

In the back-court, defence was tight, with missed passes and goals not being scored. Macedon’s errors began to appear.

At the closure of the first quarter, the Hawks were only down by five goals. They were happy, considering this team was sitting a lot higher on the ladder.

Macedon’s line up was a challenge, however coach Wendy Roberts reminded her players that this was an opportunity to extend themselves to the next level of play.

Emily and Rylee kept trying to work the ball closer to the post, while Ally and Amy worked the ball onto the circle. The Macedon’s GK, however, read the play and intercepted obvious passes.

In the second half of the game, Sarah Smith who had earlier played the C Crade team came into the WD position. Sarah was persistent with her defending approach and the Macedon’s WA did not enjoy having Sarah always tagging her, applying pressure on the pass and second effort leads.

Young Ally went into GA, which saw her drive into the circle and score much needed goals. Taylor and Bonnie continued having defending success with rebounds and tips.

Taylor Bowen’s instructions at the beginning of the day was to clear out of defence once the Hawks gained possession of the ball. This would allow Taylor to be available for the next lead and pass the ball further into our attacking end. Tegan, now playing WA, joined Amy Still in the centre which only increased speed in the attacking end.

Woodend/Hesket's performance was steady, calm and a team effort. Yes Macedon took the win, however, this B Grade team were no longer intimidated by Macedon and they stayed focused. This game saw Woodend continually work and when possession of the ball was lost, the players went onto the attack to get it back.

It was a good game, the team just need to score the goals after the hard work the defenders do and this will result in a win.